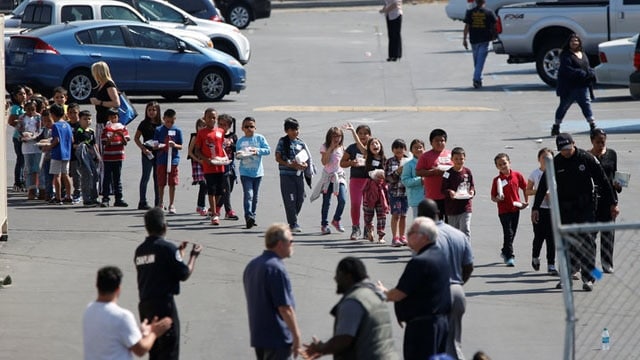 Students who were evacuated after a shooting at North Park Elementary School walk past well-wishers to be reunited with their waiting parents at a high school in San Bernardino, California, U.S. April 10, 2017. (Photo: Mario Anzuoni/ Reuters)

Researchers from the Universities of North Carolina, Ball State and Toledo randomly surveyed 600 parents regarding their attitudes toward school shootings and found nearly three quarters blame the incidents on inattentive parenting.  Another 58 percent cited bullying and just over half agreed inadequate mental health services and easy access to guns played a role.

“Gun violence is a major issue among parents, who often have a limited grasp of potentially effective interventions to reduce such events,” Jagdish Khubchandani, an associate professor of health science at Ball State University and one of the study’s authors, told the Washington Free Beacon. “Some parents are quick to blame others for a shooting because they have no idea how to stop such incidents from happening. In fact, the study suggests that most parents have a limited knowledge of what works and what doesn’t in preventing these incidents.”

According to study results, published earlier this year in the Journal of Community Health, seven out of 10 parents believe installing alert systems and working with law enforcement to draft an emergency response plans proved the best defense against school shootings. Another 68 percent recommended criminal background checks for all school personnel and 67 percent supported an anonymous tip line for students wanting to report suspected violence.

Installing metal detectors and requiring students to carry clear backpacks ranked lowest on the list of effectiveness, according to the study. Researchers said the results suggest parents “have a limited grasp of potentially effective interventions to reduce firearm violence.”

“Parents clearly have gotten a very misleading understanding of the issues here from the media,” Lott told the Washington Free Beacon. “And it is also clear that these researchers have no idea of the role that drug gangs have in the subject that they are discussing. The survey questions deal with mass public shootings, and those shootings are just a fraction of the overall school shootings.”

Lott said of the more than 2,700 gun-related deaths among adolescents in 2015, more than half were murders. According to his own research, only 28 k-12 school shootings happened in the 2015-16 academic year, or less than one percentage point of all gun-related deaths.

“The point about gangs is that these public health researchers want to scare the typical family into not owning guns, when what happens in drug gangs has absolutely no relation to what occurs inside the vast majority of American homes,” he said.

“When we start writing a study sometimes we cite facts because they are connected to the bigger public health issue,” he said. “So, we didn’t mean to scare people and parents.”