The name says it all: Combat Magnum. Which magnum? That’s up to you. Smith & Wesson is giving you two to choose from: The Model 66 in .357 Magnum, and the Model 69 in .44 Magnum. If, like me, you find the looks of this gun to epitomize the grace and beauty of the modern revolver, you may want both. 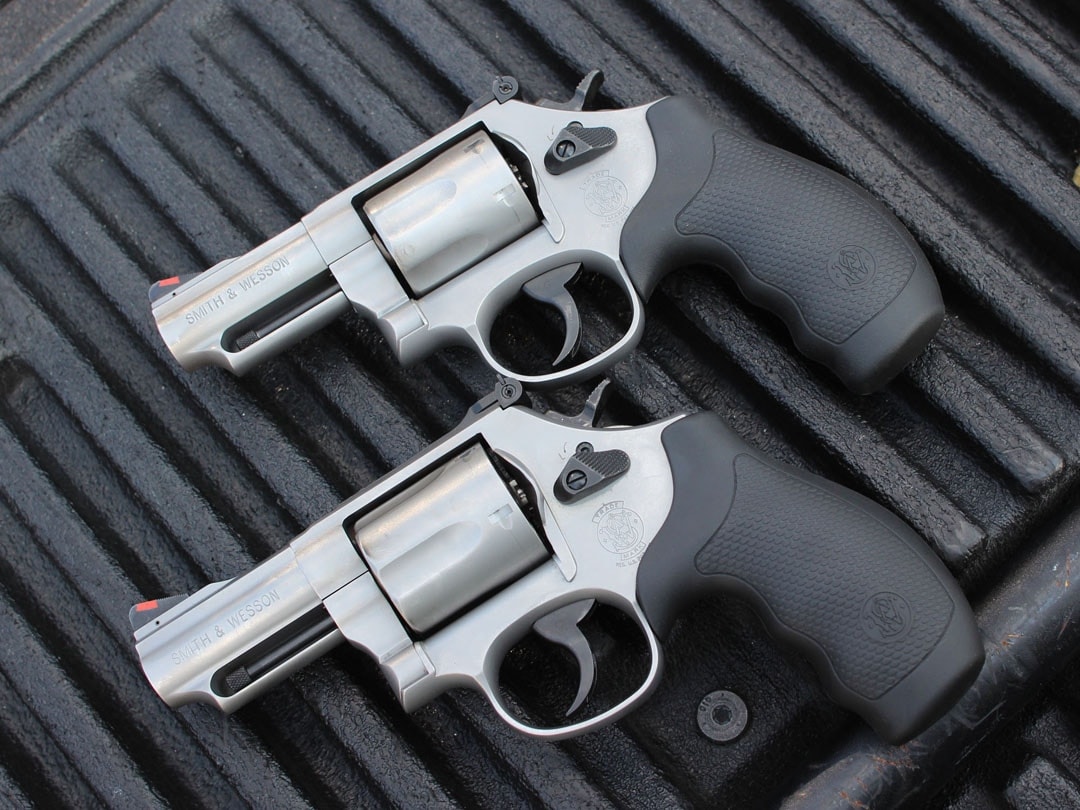 Let’s go back a bit. Revolvers are, to most of America, a bit old-school. The fully-functional polymer pocket rockets have made them all but obsolete for concealed carry, and the capacity of these beauties sucks when compared to even compact pistols. Yet there’s a mystique about them. And they work.

There’s no point in denying that Smith & Wesson is dedicated to the revolver. The company has produced consistent quality for generations. And their latest Combat Magnums are no different. These guns are small enough to conceal and heavy enough to handle the stopping power of the magnum rounds. 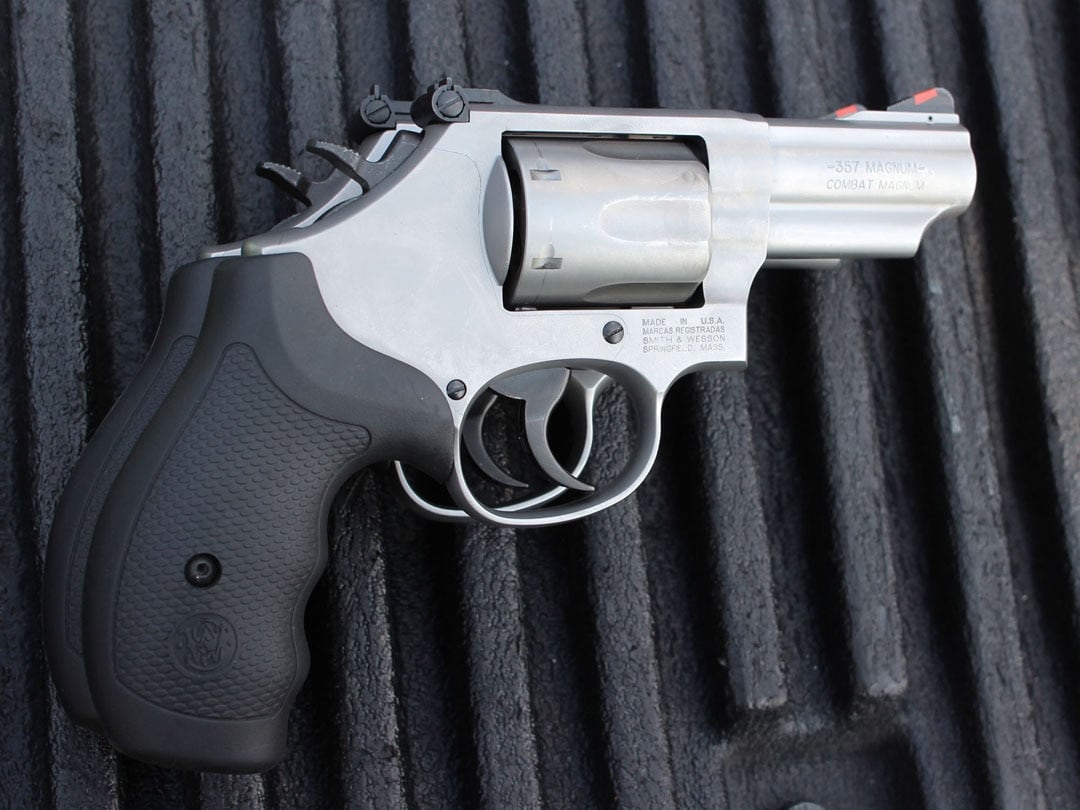 Things these two have in common

That was a pretty short section, I know. These guns may look identical to the novice, but they are not the same. 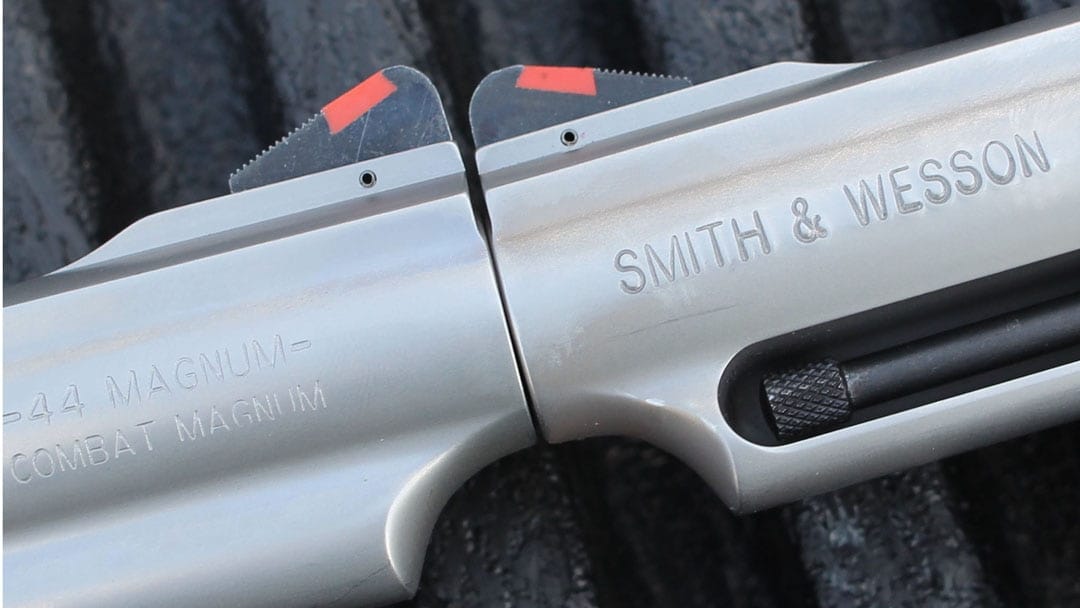 Things that are decidedly different about the two

The Model 66 .357 is big. Smith makes J-frame .357s. Those are smaller, thinner, and easy to conceal. One step up from that is the K-frame guns. Most of the service revolvers in .357 are this size. They fill the hand, and are better suited (especially with the long barrels of those like the 686) for open carry. 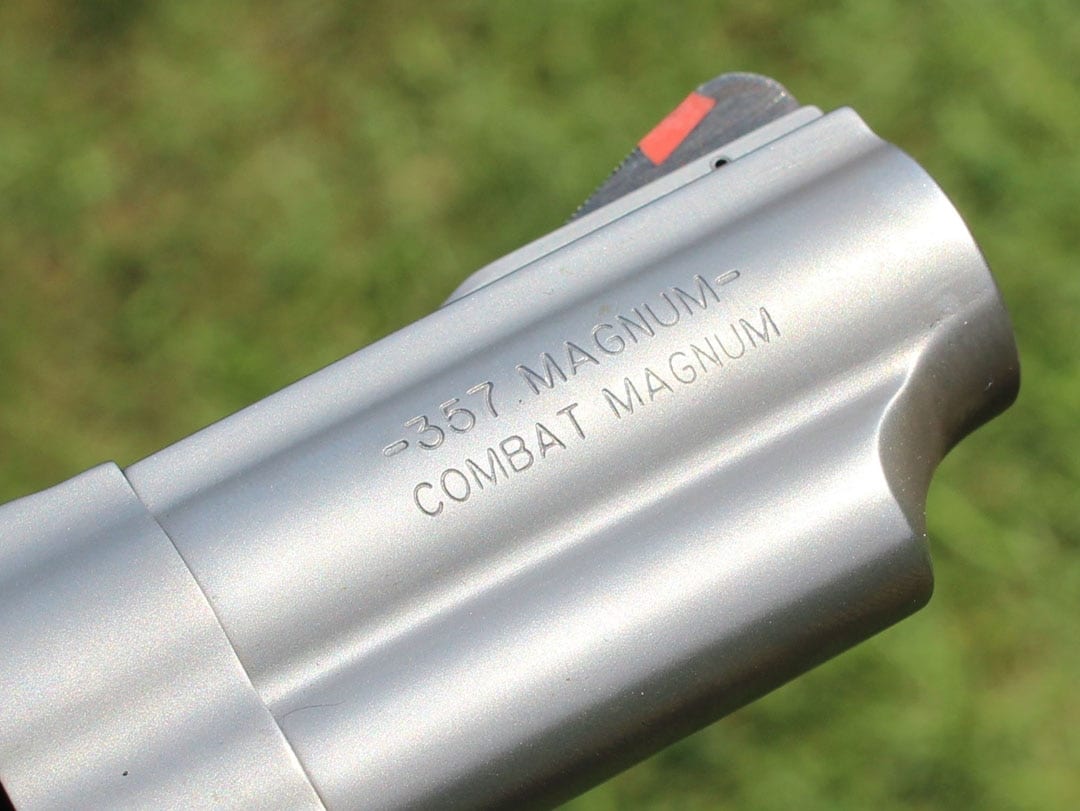 You will likely need calipers to tell the difference between the K- and the L-frame guns. They are often listed as K/L, or just called “medium” frames. But the L is a smidge larger and provides additional strength where the barrel joins the frame.

The L-frame added some girth to the barrel shank and lunette of the K-frame. The cylinder is also just slightly larger. Some people claim they can tell a K-frame from an L-frame when blindfolded, just by the balance (which is, they claim, improved in the L-frame). I have a harder time with that test.

Most of Smith’s recent .357s have been L-frames. Advances in material composition and manufacturing techniques have made the K-frame practical for the .357 again. So this new Combat Magnum marks the return of the K-frame .357. 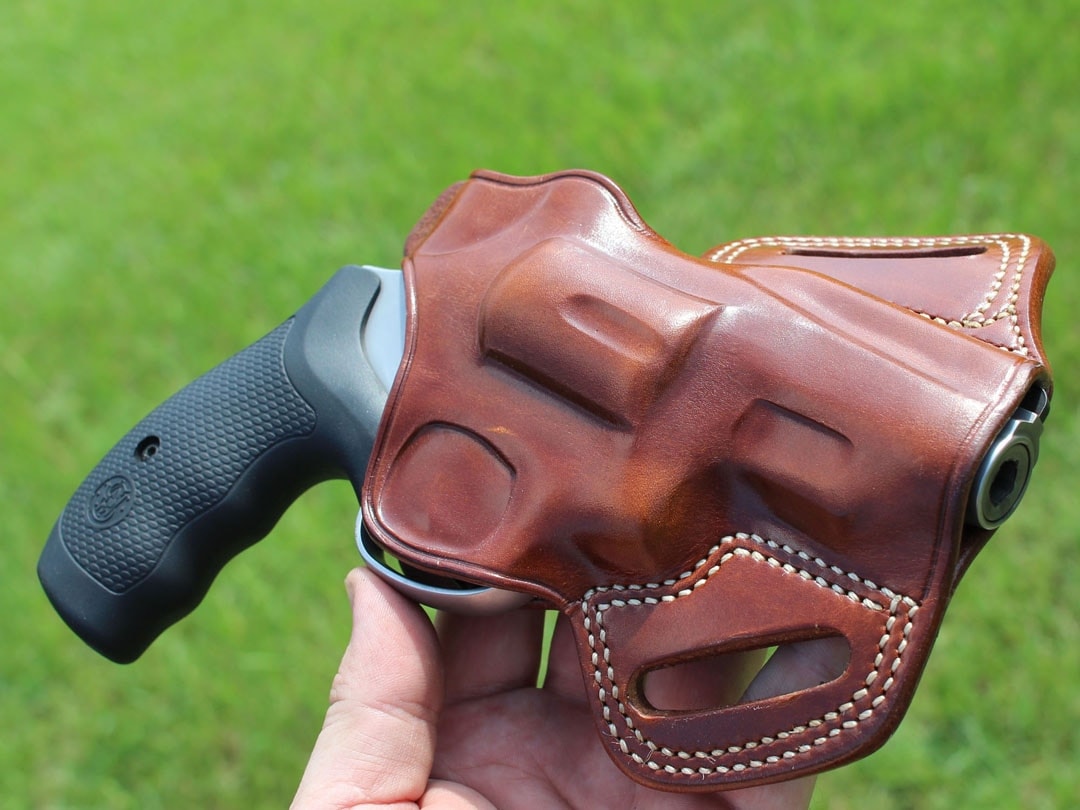 Both will fit the same holster. (Photo: David Higginbotham)

When you place these side by side, the two are almost identical. Once you know your way around them, it is easier to place the differences. Yet I constantly had to check to see which one I was holding. It produces a lot of confusion when both are together side by side.

I picked up one holster for both of these. As the .357 is a six-shot-cylinder, and the .44 is a five-shot, they come in really close to the same diameter. They both fit comfortably in the holster. 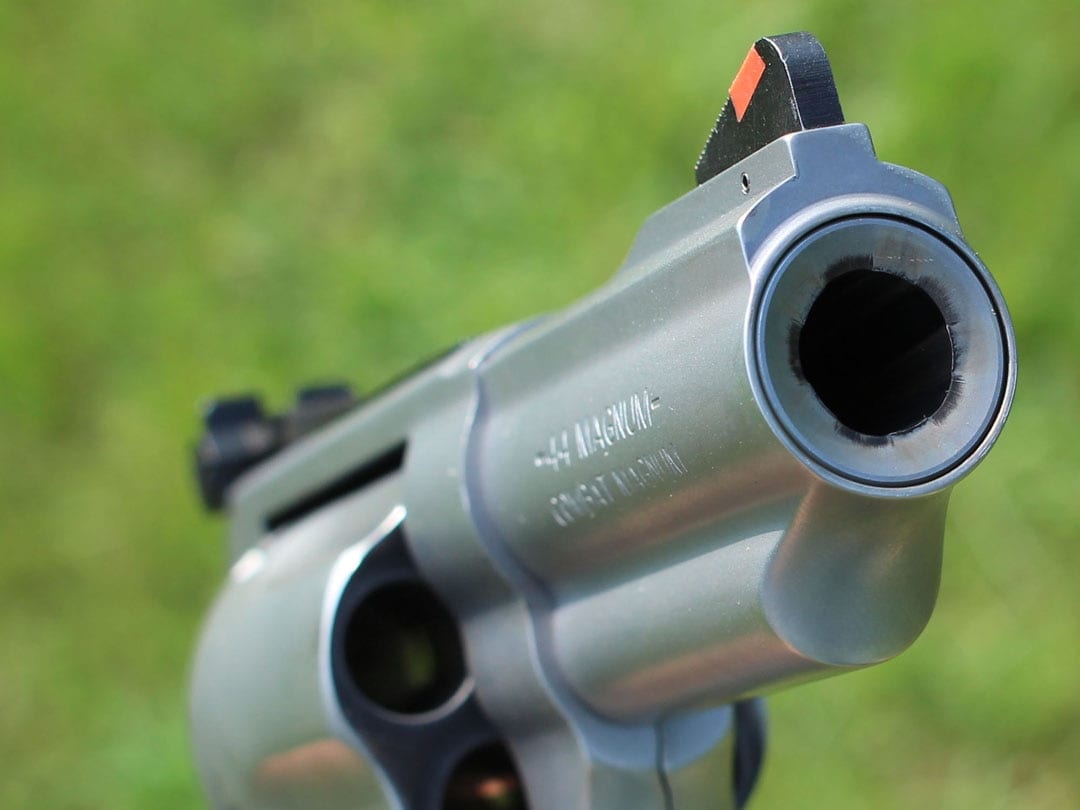 The business end of the .44 Magnum. (Photo: David Higginbotham)

Smith’s factory triggers are solid. I expect them to be good. They are consistent, too. These are the first two guns I’ve seen from Smith that had markedly better triggers. The single action is exactly on par with my other experiences, but the double-action pull is stupendous.

There’s a slight click, just before the hammer falls, that is audible if you have the gun close enough to your ear (not something I’d suggest during live fire, though). As the hammer hits that point, I can hold it. Forever. It is odd just how stable that point in the hammer’s travel is. Any more pressure, and it breaks clean. Any less, and the hammer returns home. 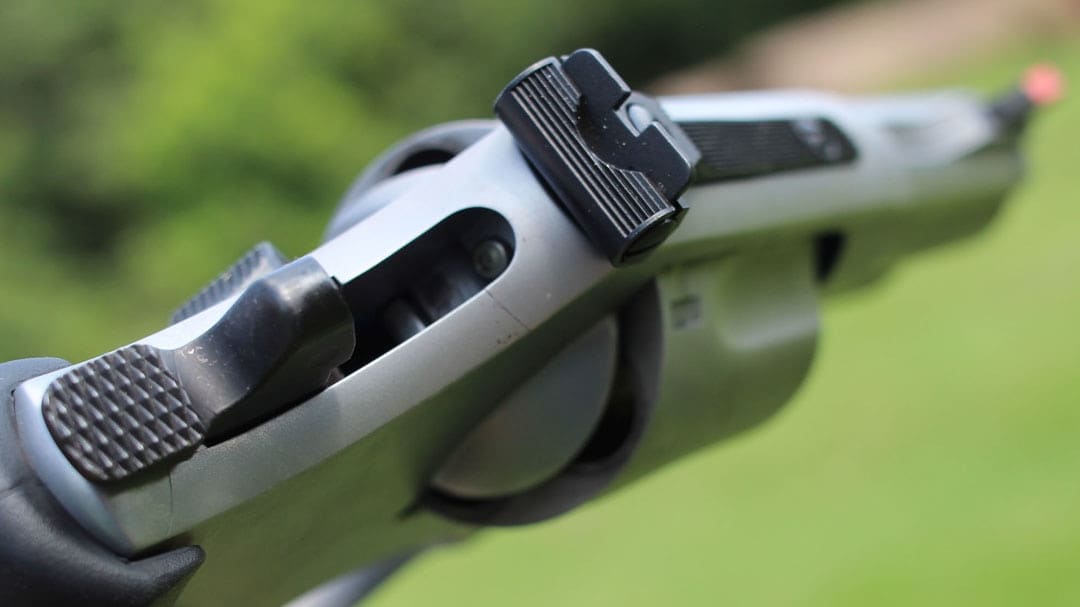 The hammer is easy to reach. (Photo: David Higginbotham)

This makes double action fire consistently smooth. I think it increases accuracy for me, too, as I can run this gun fast or slow in the double action mode very well.

And I keep writing about this as if it is just one gun. It isn’t. But both have the same quality trigger. I couldn’t tell a difference in how they worked.

Neither of these guns is small. Both are about the size of a typical compact 9mm, though the cylinder might add some to the width. They’re easy to conceal with a coat or even a long sleeved shirt, yet they don’t cut any of the corners typically associated with concealed carry revolvers. 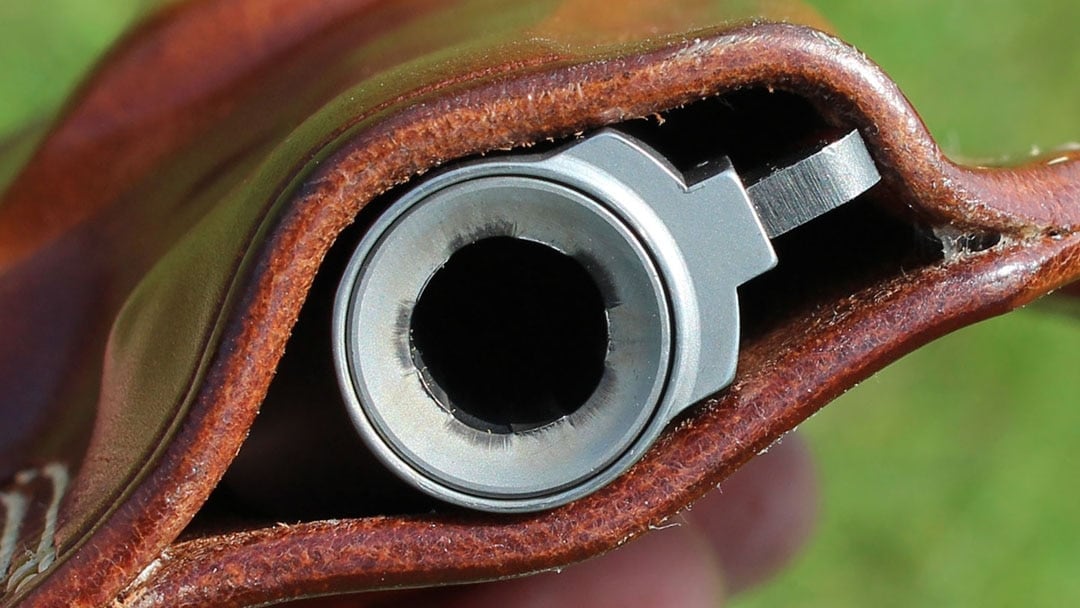 Both models are meant for daily carry. (Photo: David Higginbotham)

The grips are wide rubber grips. The sights are full and easy to use. The flat finish on the stainless is not reflective, but hardly camouflaged. The barrels are short enough to conceal, and are fast from the holster, but not so short that you give up too much power from the magnum loads.

The Combat Magnums are bigger than your typical pocket-snubbie. The 66 kicks with .357s, but it is manageable. With light .38s, the gun shoots flat.

The 69, though, kicks. I shot a bunch of video of the 69 with heavy Hornady .44 Magnums. Or I thought I did. I’m not sure if the concussion from the shots shut off the camera (which happens, sometimes, when I’m shooting close to a tripod mounted camera), or if I had a malfunction, but the video was not recorded. I had to go back and re-shoot. My wrist wasn’t pleased.

The muzzle flip of the .44 Magnum. (Photo: David Higginbotham)

That’s where this one hurts you. You will feel the bite in the meat below your thumb, and (if you shoot it enough) you may feel a slight strain in your wrist. I was sore for a couple of days after the range day. Normal activities like playing the guitar and typing reminded me of my recent range time.

But it is a .44 Magnum. Of course it is going to bite. There are a couple of things to consider there. Because most of us, at some level, are recoil sensitive, there is a risk associated with the hard-hitting rounds. You may not practice with it as much as you should. And you may flinch in anticipation of the recoil. 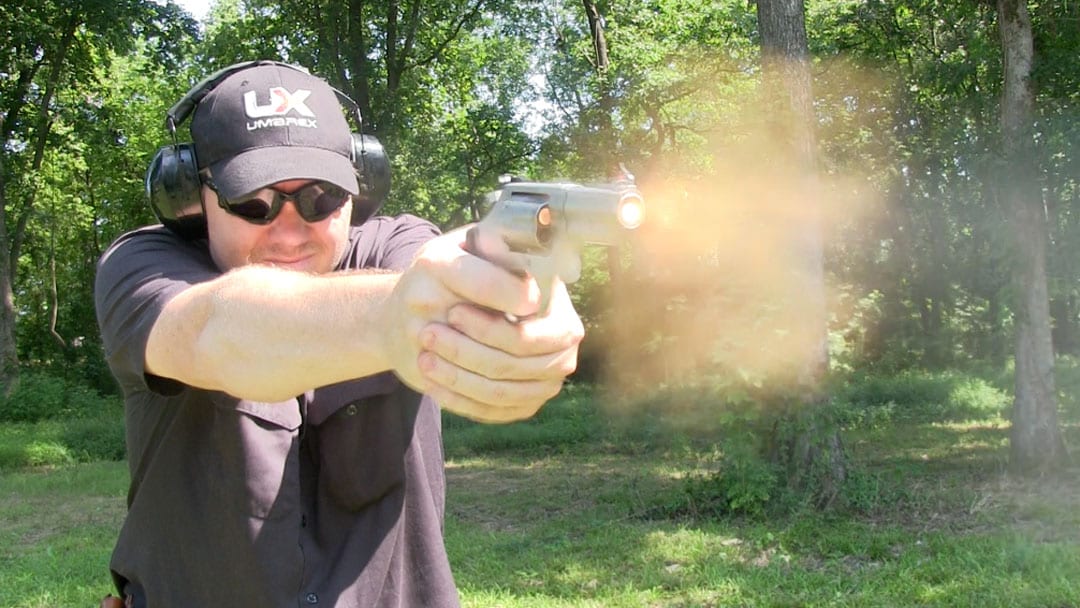 My wrist reminded me of this .44 Magnum for several days after range time. (Photo: David Higginbotham)

That said, it is a .44 Magnum. And if you want/need the bigger round, then you live with the recoil. And there are lots of reasons why having a .44 Magnum might be attractive.

Smith’s revolvers shoot straight. These aren’t meant to punch paper, but I did. Group sizes were solid. I can put a round on target from 25 yards from the holster, no problem. At closer distances, the intuitive design and ergonomics make these guns work like an extension of your hand. The .357 in action. (Photo: David Higginbotham)

For those who don’t cotton to defensive shooting drills, these are excellent sights. And the rear is adjustable. Go to it. 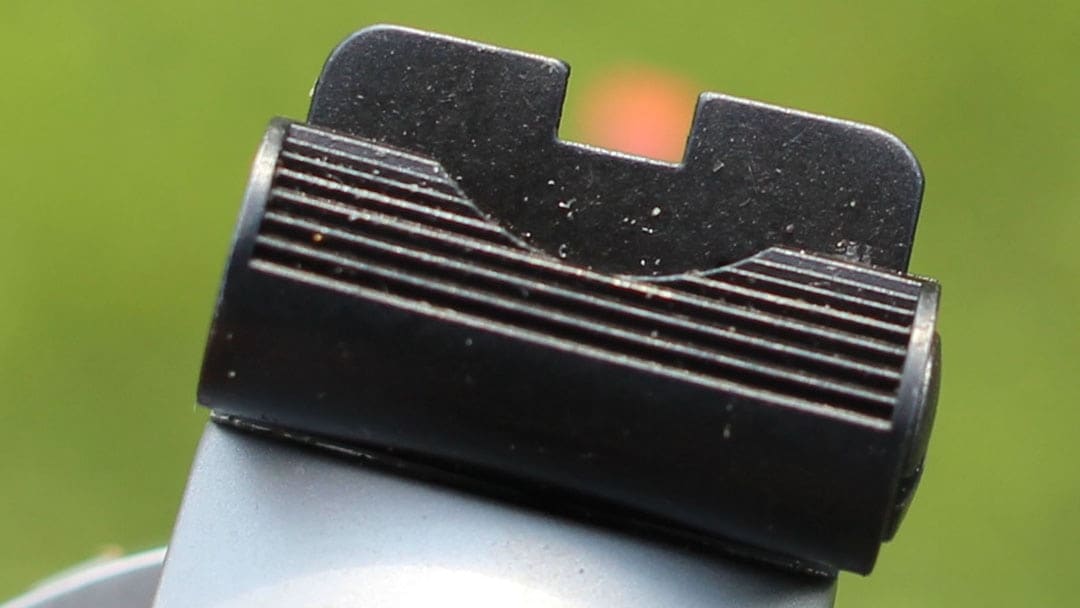 As for stopping power, that depends on what you feed it. Expect muzzle velocities out of the Model 69 in the neighborhood of 1,000 FPS or just under. That may not sound super impressive when you compare it to hot 9mms, but remember that this bullet weighs in at 200 plus grains. 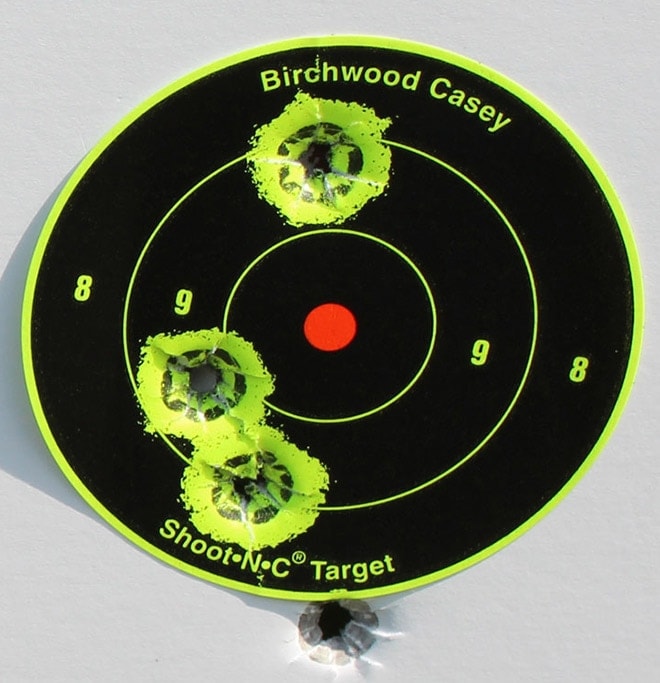 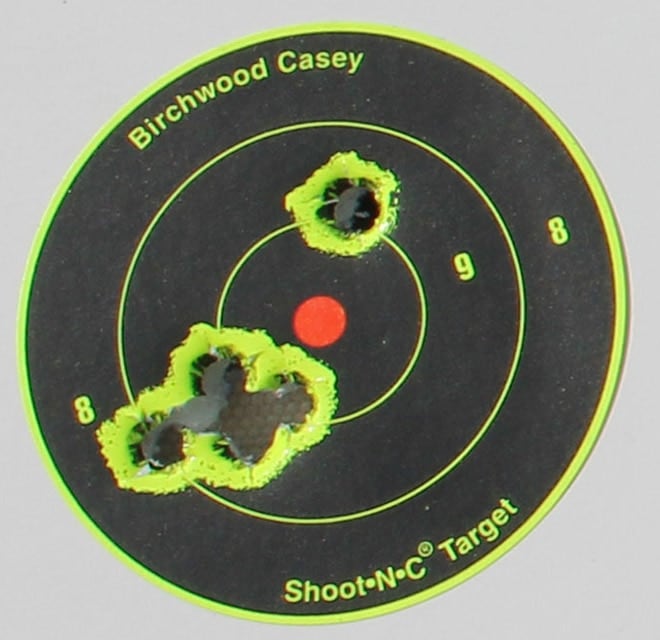 All told, these are amazing guns. The MSRP on both is $849. That means you will see prices, in this market, that make this a genuine bargain. 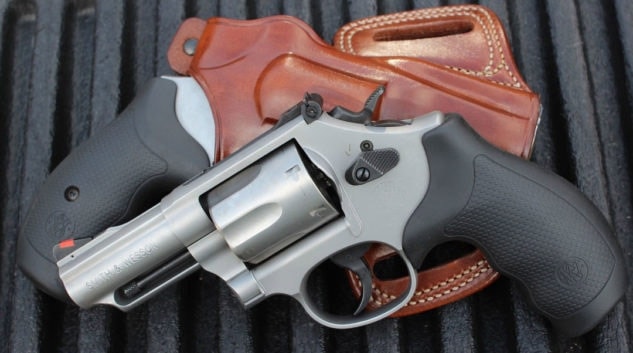 There’s never been a better time to get a new Smith & Wesson than right now. (Photo: David Higginbotham)