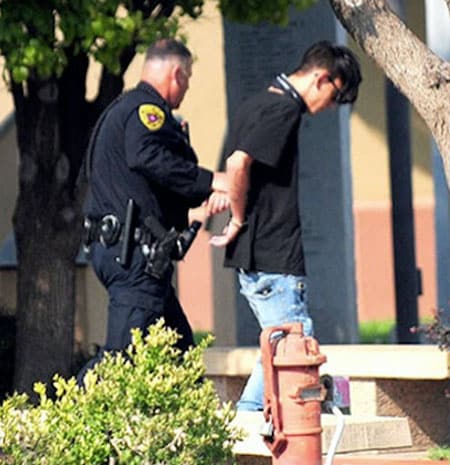 The suspect was immediately placed in police custody when responding officers arrived on the scene. (Photo: The Eastern New Mexico News)

Two people were killed, and four were injured when a 16-year-old boy opened fire inside a public library in Clovis, New Mexico, Monday afternoon.

Nathaniel Ray Jouett was placed in police custody without incident shortly after the deadly shooting rocked the small town located about 10 miles from the New Mexico-Texas border.

“This is a big blow to our community,” said Clovis Mayor David Lansford. “Our community places a high value on life and the sanctity of life, and each life that lives in this community is precious.”

The shooting unfolded shortly after 4 p.m. at the Clovis Carver Public Library. Police promptly responded to emergency calls and, upon their arrival, located Jouett, who immediately surrendered to authorities and did not otherwise resist, according to a press release from Clovis Police Department.

The department identified the deceased victims as 61-year-old Wanda Walters, a Circulation Assistant at the library, and 48-year-old Kristina “Krissie” Carter, a Youth Librarian. Injured in the attack were Jessica Thron, 30, also a Circulation Assistant at the library; Alexis Molina, 20; Noah Molina, 10; and Howard Jones, 53. Thron and Alexis Molina are listed in serious condition, while Noah Molina and Jones are in stable condition, as of Tuesday night. All four, who are receiving treatment at University Medical Center in Lubbock, Texas, are expected to recover.

At this time, authorities have not released a possible motive for the crime, and it’s unknown if the victims were targeted or chosen at random. According to local reports, Jouett was suspended from school for fighting last week, but does not appear to have a criminal history.

Also unclear is from where or whom Jouett obtained the weapon used in the attack. Lisa Baird, who witnessed the shooting, told The Eastern New Mexico News that Jouett was carrying a handgun, but authorities have not said whether more than one weapon was used.

Baird said she was about 20 feet from Jouett when she heard him yell, “Run! Why aren’t you running? I’m shooting at you! Run!”

Baird said she hid under a desk and balled up “as small as possible” while the rampage unfolded.

Jouett is facing two counts of first-degree murder, four counts of assault with intent to commit a violent felony, four counts of aggravated battery with a deadly weapon, and one count of child abuse. Authorities are seeking to prosecute Jouett as an adult and his case is set to be presented to the Grand Jury to seek an indictment Sept. 8.

The library confirmed it will remain closed until further notice.