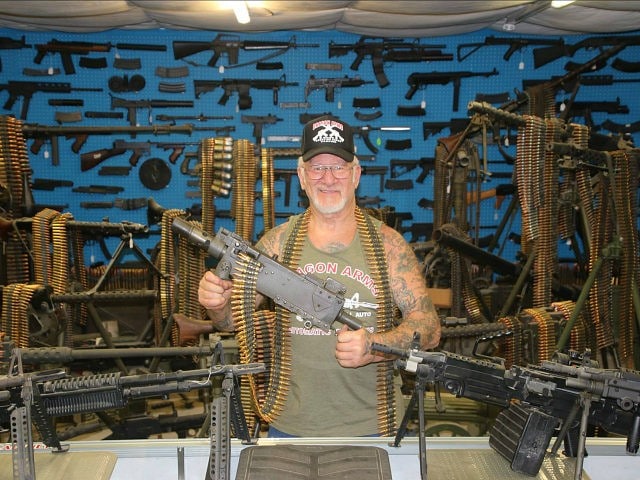 The ATF is investigating a heist in which thieves stole 65 firearms from a Colorado Springs gun shop owned by the self-proclaimed “most armed man in America.”

The incident went down Sunday night when Dragonman gun store and shooting range owner Mel “Dragon Man” Bernstein went out to dinner, the Denver Post reported. Several of Bernstein’s 35 surveillance video cameras then captured four thieves stealing the man’s truck and crashing through an electrically charged fence and metal garage to get inside the premises.

Bernstein, also the owner of a gun museum, said the thieves were lucky he was out to dinner.

“There’s a lot of idiots out there,” he said. “I’m the most armed man in America. I have over 200 machine guns in my name. If I had been there they would have gotten shot in the head.”

Bernstein described the four bandits as “young kids,” skinny and wearing masks and hoods. He was helping the ATF inventory the stolen firearms when the Post reached out to him for comment.

“They took whatever they could get in six minutes and took off,” Bernstein said, and added, “No matter how safe you try to make it they’ll find a way to get in.”

Bernstein noted the suspects got away with valuable firearms, but did not escape with his electronically controlled machine guns, which are the most expensive weapons in his shop. The thieves also left behind his Harley Davidson motorcycle, emblazoned with a fire-breathing dragon, the source of his “Dragon Man” nickname.

Officials with the ATF, taking over for the El Paso County Sheriff’s Office, later said they have taken at least one suspect into custody, the Colorado Springs Gazette reported. Camron Specht, 18, was arrested on suspicion of second-degree burglary and will most likely face federal charges. Another suspect has pending federal charges as well, but no further details were offered.

The ATF added that most of the guns have been recovered, including a fully-automatic weapon.