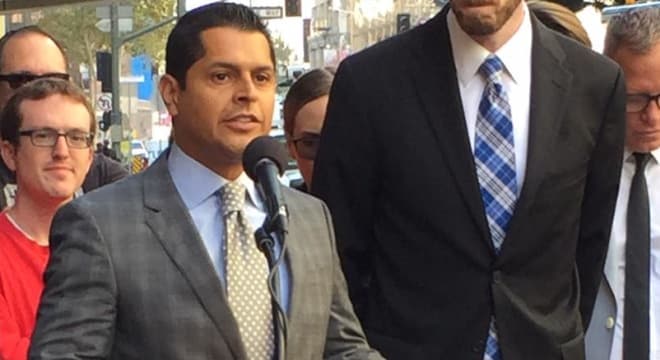 A Los Angeles area Democrat wants to limit what he sees as a federal overreach of California’s strong gun control laws.

“I’m not willing to throw away the progress we have made on gun-safety or put our communities at risk because some backward politician in D.C. thinks they know what’s better for California than we do,” said Santiago, who serves as majority whip in the Assembly. “Our state has a right to create our own laws, within the confines of the U.S. Constitution, and Californians expect that the gun control laws that they have supported and instituted in the name of public health and safety will hold – regardless of who is carrying that gun or where he or she is from.”

The resolution, AJR-24, is supported by Everytown for Gun Safety and seeks to repudiate S. 446 and H.R. 38, a pair of Republican-heavy bills on Capitol Hill that would largely extend mandatory recognition of gun permits across state lines. Of the more than 200 lawmakers supporting the reciprocity bills, 12 are from California.

Wendy Wheatcroft, with Everytown-allied Moms Demand Action, pointed to the fact that 19 states do not require gun safety classes as part of recognizing the right to carry a concealed handgun, while California does.

“Rather than create a national standard for who can carry guns in public across our country, the NRA’s longtime top policy priority would override each state’s standards, and force states like California to accept the concealed carry permitting standards of every other state, no matter how weak, or even nonexistent, another state’s standards may be,” Wheatcroft said. “Put another way, it would make the weakest link the law of the land.”

Gun rights advocates in the state look to national reciprocity as a way to restore equality to the constitutional right to keep and bear arms, with Santiago’s resolution an effort to suppress civil rights.

“This is not the first time the California Legislature has expressed their complete and utter disregard civil rights,” said Craig DeLuz, spokesman for the Firearms Policy Coalition in a statement. “California has a long and tortured history with using gun laws to pick winners and losers instead of supporting equality and civil rights for all.”

AJR-24 has been referred to the Assembly Committee on Public Safety.