Wanted drug, gun smuggler captured after more than a decade 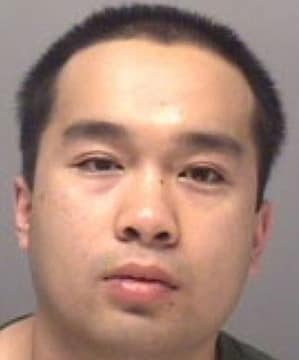 Katay-Khaophone Sychanta was on ICE’s 10 Most Wanted list. (Photo: ICE)

A pair of bike cops in Montreal arrested one of American immigration officials’ most wanted fugitives last week.

Katay-Khaophone Sychanta, 35, was arrested Aug. 23 near a train station in the Saint-Laurent borough, according to the Canadian Broadcasting Corporation.

A dual citizen of Laos and Canada, Sychanta was arrested after one of the officers got off his bike and chased him on foot. Authorities say he handed over a phony ID from the U.S., but was identified when they fingerprinted him.

“Luckily, with the identification we were able to locate a man that was wanted for three years,” said Montreal police spokesperson Const. Jean-Pierre Brabant.

Sychanta was on the U.S. Immigration and Customs Enforcement 10 Most Wanted list. According to ICE, he is the “suspected ring leader of a drug-smuggling organization which supplied millions of ecstasy pills and hundreds of pounds of marijuana to several distributors located in Michigan, Ohio, Illinois, Massachusetts, Georgia, and New York.”

He’s also allegedly been involved in smuggling cash, guns, cocaine and heroin, according to authorities. He was indicted in the Eastern District of Michigan in 2005 for conspiracy to distribute a controlled substance. He evaded authorities and was indicted a second time in Michigan in 2013. Sychanta is the subject of three additional warrants in Ontario, Canada.

He was considered armed and dangerous by U.S. authorities, and Homeland Security Investigations was offering a $25,000 reward for information leading to his arrest.

“He has a history of violence and has allegedly made threats against HSI Special Agents and other law enforcement officials,” ICE wrote on its website.

Sychanta appeared in court last week in Montreal before he was transferred to Ontario Provincial Police. Authorities say he may be extradited to the United States.