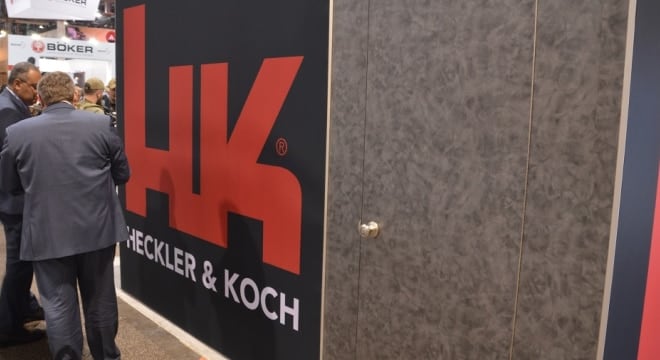 H&K, located in Oberndorf near Stuttgart, Germany, has been in the arms business for 65 years and this week forced out their chair and CEO. (Photo; Chris Eger/Guns.com)

The parent company of the German-based Heckler & Koch Group on Tuesday announced a shake up in the gun maker’s top leadership.

The supervisory board of HK AG detailed that Norbert Scheuch, who served as chairman of the executive board and chief executive officer, had his appointment revoked, effective immediately.

“The already initiated strategic realignment of the Group, the operational transformation process and the product innovation initiative will be continued unchanged,” said the company in a statement.

HK’s financial health has been a matter of concern for investors in recent years, with Moody’s downgrading the company in 2015 due to weak operational performance, pending legal troubles and a minimal amount of cash on hand. The company’s majority shareholder later loaned HK 60 million euros of his own money to get the arms maker back on track.

While the multifaceted company has released a number of new products, including the SP5K and VP9SK, they have also been mired in a lawsuit over the tanked XM25 Counter-Defilade Target Engagement System, a 25mm airburst grenade launcher the military sought to procure, and have had lingering questions over the accuracy of their G36 rifle platform. Last year, HK limited their deals to NATO-member countries only cutting out potentially lucrative future contracts with Middle Eastern and Pacific clients with deep pockets.

Wolfgang Hesse, who is the sole board member of the parent company, will take over Scheuch’s duties until a replacement is made.