Meanwhile in Syria: How about a bullpup PK machine gun 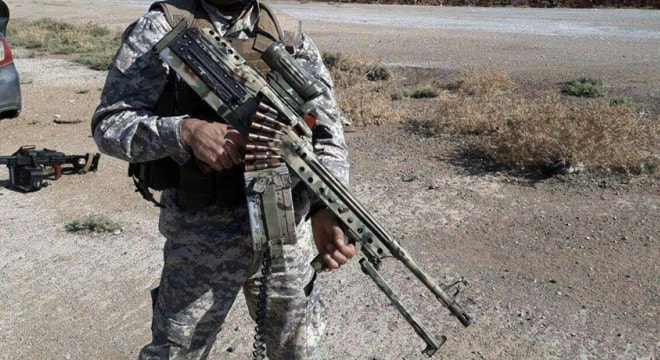 Note the very natural 135-degree slope of the ammo can on the PKP Pecheneg bullpup (Photo: MilMag)

Photos have surfaced of a peculiar PK-style machine gun in the hands of rebel groups in Syria, but with a serious update.

The 7.62x54R-chambered Pulemyot Kalashnikova, a general-purpose machine gun designed by Mikhail Kalashnikov of AK47 fame in the 1960s, is ubiquitous around the world. However, in photos posted by the Polish weapon site MilMag this week, a bullpup version of the classic GPMG in the hands of Ajnad al-Kavkaz fighters in Syria is seen in the wild.

The gun looks to be a PKP Pecheneg bullpup which is elusive in the West but was spotted in Russia last year. Reportedly, the design not only chops off 11-inches from the overall length but also trims the weight a bit.

Other photos of the group show them armed with AKMs, RPGs, an RG-6 (6G30) 40mm revolving grenade launcher and what looks to be a Noveske AR.

A 2016 article by The Intercept characterizes the Ajnad al-Kavkaz group, largely drawn from Chechen exiles living in Turkey, as something akin to the Mandalorians.

“These young people, in their 20s and 30s, are already professionals,” says the piece by Marcin Mamon, who met with the group’s leader in Istanbul. “They’ve grown up with war and don’t have any other life to go back to, nor do they expect their lives will ever change. They are largely better equipped than their fathers. Most spend their savings on the best in the wartime survival equipment, clothing, and weapons. They fight frequently on foreign soil.”