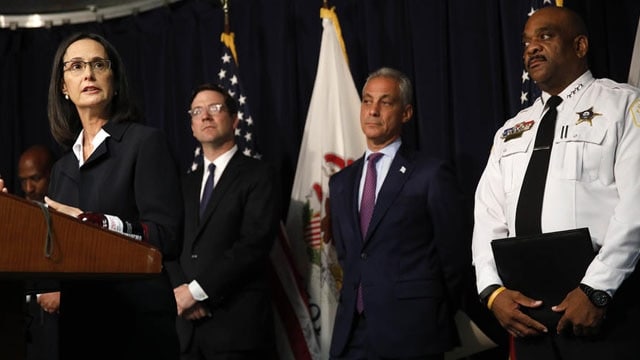 Alderman Paddy Bauler once said that “Chicago ain’t ready for reform.” That was in 1955 when Richard J. Daley was first elected mayor. Now, more than half a century later, the City of Big Shoulders continues its struggle with reform measures.

Case in point: Illinois Attorney General Lisa Madigan on Tuesday filed a lawsuit against the city, alleging it maintains police conduct in violation of state and federal law, namely excessive force in violation of the Fourth Amendment of the U.S. Constitution.

If all of this sounds familiar, that’s because this is a variation on a theme. Madigan’s lawsuit is an effort to reignite calls for a consent decree that came following a damning report from the Department of Justice earlier this year, alleging rampant Constitutional abuses by those serving within the Chicago Police Department.

But a week after the report was released, President Donald Trump was sworn in, and then Republican Sen. Jeff Sessions was tapped to serve as attorney general. Sessions has long been a critic of the consent decree process, and by March, he announced he’d be pulling back on the previous administration’s agenda, which saw more than two dozen police departments investigated nationwide, and more than half of those tied down to costly, court-ordered reforms.

Around the same time, outgoing U.S. Attorney Zach Fardon wrote in an open letter that Chicago needed a consent decree. He pointed to the shooting death of Laquan McDonald by a Chicago Police officer, the release of dash cam video from the incident more than a year later, the public outcry, the federal investigation, and the effect it had on officers in the city.

“Cops stopped making stops,” Fardon wrote. “And kids started shooting more — because they could, and because the rule of law, law enforcement, had been delegitimized. And that created an atmosphere of chaos.”

And the chaos reigns. More than 430 people have been shot and killed in Chicago so far this year. That’s not too far behind last year’s pace, which saw record-setting bloodshed.

In January, Emanuel signed on with officials in the Obama Justice Department, signaling his intent to move forward with the consent decree. But with a Trump Justice Department unwilling to push for court oversight, Emanuel started shifting his approach, and worked on an out-of-court agreement for police reforms, insisting the move would get the same results.

But that didn’t sit well with Madigan, who said it was “ludicrous” to work on an agreement with a White House that “fundamentally does not agree with the need for constitutional policing.”

City attorneys are in the process of asking a judge to dismiss another case filed by civil rights groups and police misconduct victims. The lawyers argue the Emanuel administration has instituted sufficient police department reforms already.

“Do I think (Madigan) is forcing (Emanuel’s) hand? Yes,” said University of Chicago law professor Craig Futterman, who’s part of the legal team in civil rights case. “He — even after we filed suit and up until today — was fighting tooth and nail: We don’t need a consent decree.”

So it was striking that Emanuel stood by Madigan Tuesday at a press conference in the city’s Loop. Madigan said minorities in Chicago “live in fear of criminals and the police,” and stressed the importance of securing a consent decree overseen by a federal judge. The mayor noted the reforms already set in motion without a decree in place: additional training, more officers, body cameras, Tasers, and the like. He said absent a willingness from Washington to move forward on a decree, a partnership with Madigan was necessary.

“I am proud the attorney general is standing up for our city, for its residents and for our police officers where the Trump administration fell flat,” Emanuel said, noting the White House wasn’t even interested in the proposed out-of-court agreement.

For Emanuel, reform must come, but not at the expense of officer morale. “Acknowledging the mistakes of the past is the only way to learn from them, and we must make and take any steps that we can to make sure they are not repeated again in the future,” he said. “But the result cannot be that we drag down the men and women that we give the charge to keeping our communities safe. It must be that we build them up so they can make our communities also safe. Reform must reinforce our public safety efforts, not injure them.”

The mayor repeatedly said the city would “pursue reform with our officers, not to them, and not at them.”

But even as Emanuel, who once turned down a scholarship to the Joffrey Ballet, does his best political dance, it’s still not enough for the police union, who blasted the lawsuit as “a potential catastrophe for Chicago” that would “only handcuff the police even further.” A spokesman for the Chicago Fraternal Order of Police said they’d explore their options with their legal team.

Will the Chicago Police Department ever be subject to a consent decree? Time will tell. Is Chicago ready for reform? Sure, but it’s complicated.