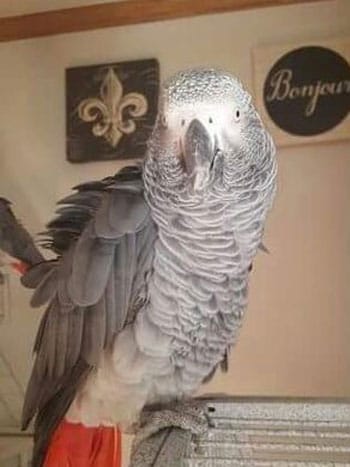 Bud, an African grey parrot, was a key witness in the murder case of his previous owner. (Photo: The Detroit News)

A 49-year-old woman was sentenced to life in prison Monday for the May 2015 murder of her husband, an act which was witnessed – and later mimicked – by a talking parrot.

A key witness in the case turned out to be an African grey parrot owned by Duram’s husband, Marty. The bird, which has the unique ability to mimic specific voices, repeated an argument following the murder. The mimicked argument included two distinct voices – one male, one female – with the male saying, “Don’t fucking shoot.”

The parrot, whose name is Bud, went to live with Marty’s ex-wife, Christina Keller, following Marty’s death. It was Keller who first heard Bud’s rendition of Marty’s last moments and alerted authorities that the bird was a possible witness to the murder.

Glenna Duram’s attorney is planning to appeal the court’s decision.