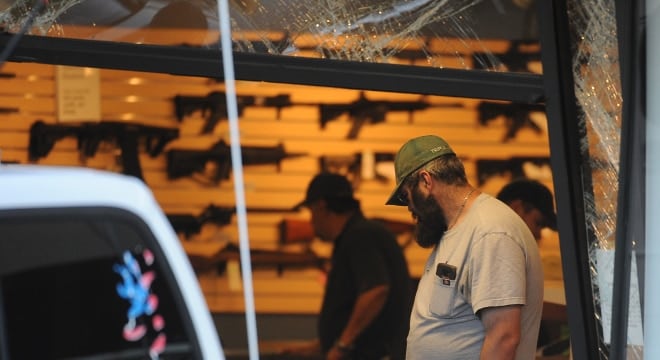 Proposals by Calfornia lawmakers would mandate more security to prevent gun theft such as in smash-and-grab burglaries such as this one at involving a Jeep Cherokee that plowed through the front entrance of a Colorado store in May. (Photo: Steve Nehf/The Denver Post)

Measures pending in the California Legislature could place licensed firearms dealers in the state under the gun of new rules and security procedures.

Two bills in particular — SB 464 and AB 1525 — would set in place revamped storage and security guidelines while ordering a change in mandatory warnings dealers must provide with firearm purchases.

SB 464, sponsored by state Sen. Jerry Hill, D-San Mateo, would mandate that display cases in gun stores be constructed either of smash-proof polycarbonate panels that are at least one-quarter inch thick or laminated glass designed to make it harder to break. Other procedures, such as storing guns in a locked steel gun rack, are included and are required by July 1, 2019.

To prevent smash-and-grab vehicular attacks, bollards capable of stopping a 5,000-pound vehicle traveling at 30 mph would be required for store fronts located at ground level.

Hill argues the bill is needed to help address gun theft from dealers, pointing to a 2016 media report that analyzed 70,000 lost or stolen guns between 2010 and 2015, discovering 2,655 of the guns were connected to a crime.

The California Association of Federal Firearms Licensees refute the numbers, arguing that of the 70,000 guns stolen only 797 firearms were from FFL holders.

“In fact, recent reports have shown that a firearm in the hands of law enforcement officers and agencies is more likely to come up missing than those in the possession of licensed firearms dealers,” said the group in a statement.

The second measure underway, AB 1525, would dip into the state’s Firearms Safety Account to the tune of $70,000 to print 1.3 million new warning labels to direct those buying a gun to the website of the California Attorney General for information on complying with new firearms laws. Backed by the Brady Campaign, the move would be the latest installment of the state’s mandatory gun warning labels which have been standard since 1993.

Gun rights advocates argue the Attorney General’s website address is insufficient as information about the most recent laws passed last year is absent and the site provides little in the way of technical help.

In the end, state FFL groups argue the measures would have a negligible impact on crime while making it harder to remain in business.

“These bills add to the ever-increasing number of unnecessary laws and regulations that restrict how, when and where we are able to engage in the business of facilitating the exercise of a constitutionally enumerated right,” said CAL-FFL President Mike Baryla in a statement.

SB 464 passed the Assembly last week and is eligible for a concurrence vote in the Senate, which would send to Gov. Jerry Brown’s desk. AB 1525 is pending a third reading in the Senate.