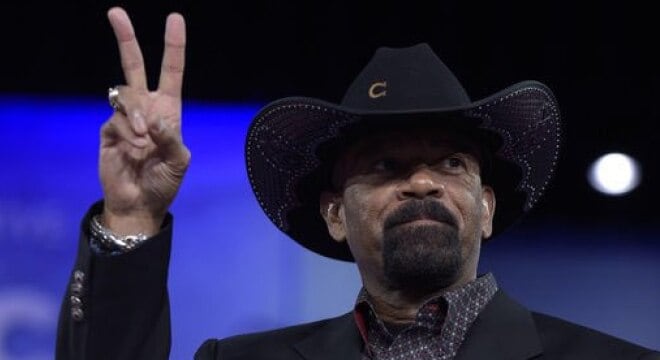 Clarke, a facet in law enforcement in the Milwaukee area for 40 years, has left office. (Photo: David Clarke via Twitter)

On Thursday, the outspoken four-term sheriff of the most populous county in Wisconsin resigned from office.

In a simple one-sentence letter to Milwaukee County Clerk George Christenson, Sheriff David Clarke, 61, announced he was resigning effective at the end of the day.

“After nearly 40 years serving my community I’m retiring,” Clarke posted to social media early Friday. “What a ride! I will announce my future plans next week after the Labor Day holiday.”

Clarke, though a registered Democrat, was appointed in 2002 to fill the open top spot at the Milwaukee County Sheriff’s office by Republican Gov. Scott McCallum and then went on to win election four times since then. He came to the post after a more than 20-year career with the Milwaukee Police Department, rising to the rank of captain.

It is unclear what Clarke’s next move is, with Politico reporting that he was likely to join the staff at the White House, with longtime ally President Trump being a fan of his book, though such a move was disputed by a story in the Milwaukee Journal-Sentinel saying sources close to Clarke point to a job “outside of government that support the Trump agenda and keep Clarke in the public eye.”

In May, Clark reportedly was hanging up his sheriff’s star and moving to a federal job with the Department of Homeland Security, though the transition never materialized.

Often at odds with Milwaukee’s mayor and police chief, Clark has drawn flak over conditions at his jail, alleged plagiarism of his 2013 master’s thesis, and allegations of abuse of power.

Never one to shy away from rhetoric, Clarke catapulted to the national spotlight in 2013 after he advocated armed self-defense as a SOP to waiting for a possibly lengthy police response. Since then, he has been a frequent talking head on cable news programming and an ardent supporter of Trump both during his election campaign and in his policies while in office, blasting sanctuary cities and leftist groups.

An advocate for gun rights and by extension the National Rifle Association, Clarke often spoke at the group’s annual meetings and appeared in ads for the organization.

Clarke’s successor to complete his current term will be chosen from a list of candidates submitted to Republican Gov. Scott Walker.