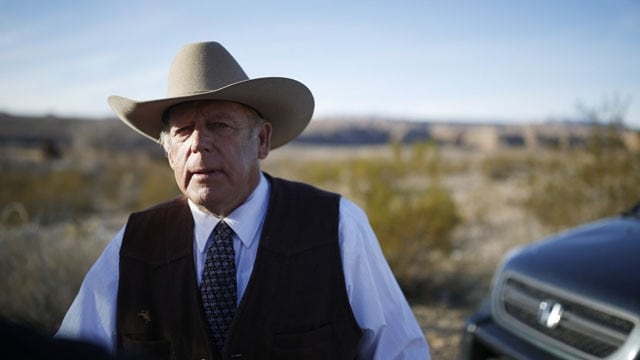 Nevada rancher Cliven Bundy, together with his two sons and four other defendants, will face a trial in October.

U.S. District Judge Gloria Navarro on Thursday set the trial for Oct. 10, according to court documents.

Prosecutors say Bundy conspired to prevent government officials from rounding up cattle on public land during a tense, six-day standoff between dozens of armed ranchers and U.S. Bureau of Land Management officials in April 2014. The agents were trying to collect the cattle in lieu of $1 million in grazing fees that Bundy had racked up over more than two decades. He refused to pay those fees. The so-called “Battle of Bunkerville” happened about 80 miles northeast of Las Vegas, and ended when BLM agents retreated. No shots were fired.

October’s trial will mark the second group of people to be tried in connection with the armed standoff this year. Earlier this month, two men — Montana native Richard Lovelien and Idaho resident Steven Stewart — were acquitted of all charges in a retrial related to the standoff. Two other men, Scott Drexler and Eric Parker, were found not guilty on most of the charges against them. The jury split on four counts for Parker and two for Drexler. Federal prosecutors have said they intend to try them a third time.

Meanwhile, a group of lawmakers in Idaho are calling on U.S. Attorney General Jeff Sessions to release four of the defendants who are still in custody. The four men are natives of Idaho.

“Further exploitation of these citizens would be an affront to justice and notice to the public of prosecutorial harassment,” the Aug. 29 letter says. Idaho Rep. Dorothy Moon, a Republican, drafted the letter, and 38 other lawmakers signed on.

Among those set to face trial in October are Cliven Bundy, his sons Ammon and Ryan, as well as militia founder Ryan Payne and Pete Santilli, who has argued he was a journalist covering the standoff.

“Ammon has been in custody since January of 2016 without benefit of bail or the comfort of home and family in spite of being found not guilty of all counts in the Oregon trial,” Moon and the lawmakers argue in their letter. “Ammon has been stripped of normal due process for a prosecution that now seems flimsy as we discover evidence exposed during these previous hung trials of others for similar offenses.”

In the first trial, 53-year-old Gregory Burleson was found guilty of eight counts, including threats against federal agents and assault. He was sentenced in July to more than 68 years behind bars.

Todd Engel was also tried and found guilty in April. He has yet to be sentenced. Another man involved in the standoff, Gerald DeLemus, was sentenced to more than seven years in prison after he pleaded guilty to the charges against him.

A total of 19 people have been arrested and charged in connection with the standoff. A third group of people is set to be charged next year.