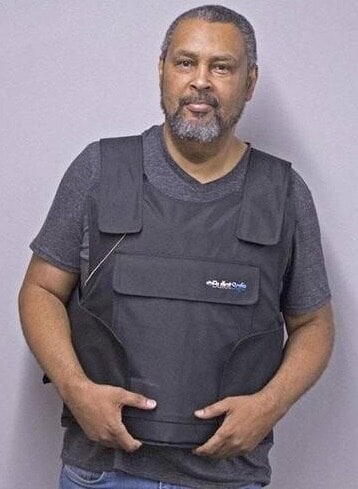 One professor at the University of Kansas is not a big fan of the state’s new campus carry law and has not been shy about showing it.

While lawful gun owners can now carry concealed guns on campus, including students and staff 21 and older, film and media professor Kevin Wilmott has chosen to don a bulletproof as a form of protest, the Kansas City Star reported.

Known for directing such films as C.S.A: The Confederate States of America, Wilmott said the visibility of his vest is intentional, meant to remind people that firearms are now allowed on the campus, even if people can’t see them.

“Try to forget I’m wearing a bulletproof vest and I’ll try to forget that you could be packing a .44 Magnum,” the professor told students Tuesday morning during the first class of the semester.

Wilmott intends to wear the vest all year long to protest the law that took effect July 1 and now allows lawful gun owners to carry concealed guns into most public buildings in the state, including those at public universities. Kansas is now one of eight states that allow concealed firearms on college campuses.

The film buff detailed his motivations in a statement published by the Star, saying: “I hope by wearing the vest that it is a constant reminder to all of us that our students could have a gun, and in an emergency this could make a bad situation even worse.”

He continued: “This new Kansas policy tries to make handguns a normal part of everyday campus life: book bag, cellphone, laptop, handgun and ammunition. This is a dangerous and reckless policy.”

Wilmott went on to describe the concerns expressed to him by a fellow professor who is Muslim. At an open meeting regarding the law’s implementation, she said she feared the law would affect free speech in her classes and elsewhere on campus, an opinion that Wilmott echoed in his statement.

“This policy is an obvious threat to all who employ free speech and will destroy the trust-based interaction between students and instructors,” he said. “In the end, it threatens to wreck the very fabric of campus life. It is for that reason that I will wear the vest as a safety protest to a policy that is both dangerous and counter to the heroic history and spirit of the University of Kansas.”

While other professors and students voiced similar concerns, many have also expressed support for the law, including one student who now carries a Glock 19 handgun on campus.

The student, profiled by the Star, said he has the handgun on him for protection. Tom, a college senior, added that he didn’t want his last name published, as he is well aware of the controversy the new law has caused and did not want others to judge him or try to steal his gun.

“I mean, I’m just a normal student who cares about their safety and the safety of people around them,” Tom said. “You see all this stuff on the news about people getting killed and having no way to protect themselves. That is why I choose to carry.”

To address any concerns or questions students and staff may have about campus carry, KU has been conducting informational sessions. The first sessions took place Wednesday and Thursday and covered de-escalation techniques, the Lawrence Journal-World reported. The next two sessions are scheduled for Sept. 5 and Sept. 8 and will focus on active shooter situations.

“I think it’s important that we talk about this being an ongoing dialogue that the law is something that we have to address,” said Jill Hummels, communications manager at the KU provost’s office. “And what we’re looking at is, how do we help people feel comfortable and in control with the new environment that they are in?”

The sessions are tailored for students, staff and faculty, but are open to the public as well. Hummels said much of the information had already been posted to the school’s concealed carry informational website.

In a memo sent out to colleagues earlier this month, KU Provost and Executive Vice Chancellor Neeli Bendapudi outlined the effect the law would have on the campus and reminded faculty that they could not ban guns from their classrooms nor ask who is carrying them.

The provost also reiterated that faculty and staff could not change locations for their classes without prior approval and cannot use KU resources or equipment to support changing the law. Staff and faculty also cannot designate their offices as gun-free zones.