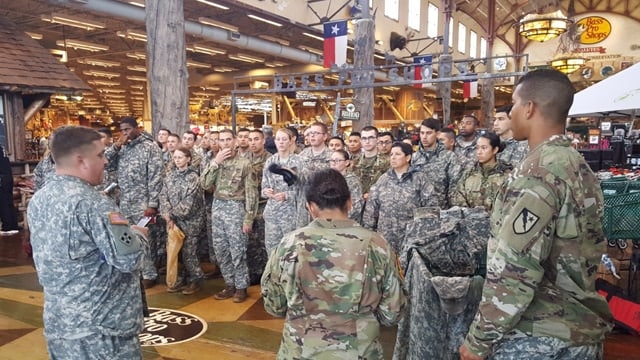 Outdoor retailers across the country pledged millions of dollars and hundreds of thousands of supplies to the Harvey relief effort in Texas this week.

Cabela’s, Bass Pro Shops and Camping World announced their own efforts to aid the federal government in providing basic necessities for survivors and boats for ongoing rescue operations in the Texas coastal bend inundated with more than 50 inches of rain since the storm’s landfall last week.

Harvey slammed into the Texas coastal town of Rockport on Aug. 25 as a category four hurricane with wind gusts topping 130 miles an hour and torrential downpours that dumped  more than four feet of rain from Corpus Christi to Houston through Wednesday.

The National Weather Service warned the “unprecedented” storm would stall over the Houston area and cause flooding unlike anything the state has ever seen. So far, first responders and volunteers have pulled more than 3,000 people from flood waters as the city copes with 30,000 displaced residents. At least 39 people have died, according to multiple media reports.

“Our thoughts are with all those affected by Harvey and Cabela’s is dedicated to helping those impacted by providing clothing, footwear, waders, boats, motors, thousands of bottles of water and more,” Cabela’s said in a statement posted to its social media channels Thursday. “We’ll continue to work closely with federal, state and local officials to be there for these communities through this trying time, especially in the days and months to come.”

Bass Pro Shops said Monday the retailer provided 80 tracker boats to government agencies and rescue organizations and $40,000 worth of “essential supplies” to Convoy of Hope and American Red Cross.

Likewise, Camping World CEO Marcus Lemonis — who recently bought out bankrupt Gander Mountain and re-branded the retailer as Gander Outdoors — pledged to raise $4 million for ongoing relief efforts in Texas. He donated $500,000 personally, according to his social media channels.

“We’ve had amazing success in raising cash at the register,” he said Wednesday. “Now, keep in mind, every dollar we raise, the company will match it. Our goal is to raise in excess of $4 million. We’ve had people walk in and write $25,000, $10,000, $15,000 checks, but let me be honest, every dollar matters. If you can only donate a dollar, we will accept that as well.”

He told his Twitter followers Thursday the chain’s locations across the country had collected more 80,000 donated garments. He set a goal of donating more than 300,000 clothes and shoes and other necessary supplies to the relief effort through Labor Day.