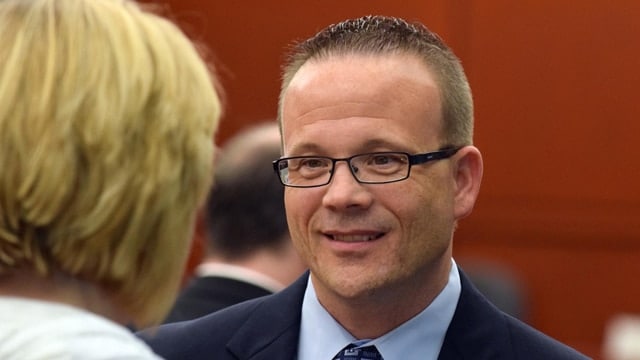 Punta Gorda Police Chief Tom Lewis was fired Wednesday — the latest chapter in the ongoing fallout following the fatal shooting of a librarian last year during a police training demonstration.

“I cannot retain a leader based on character alone,” Kunik said. “We will begin a national search for a police chief immediately.”

In June, Lewis was found not guilty of a misdemeanor charge of culpable negligence in the death of 73-year-old Mary Knowlton. She held a blue simulated weapon on Aug. 9, 2016 while Officer Lee Coel used a Smith & Wesson revolver loaded with wadcutters — bullets that look similar to blanks. Knowlton was shot twice during the “shoot/don’t shoot” community event and died.

Kunik said Lewis refused to offer his resignation, instead offering to be demoted to road lieutenant.

“We agreed to take the weekend to consider the options and reconvene Monday,” Kunik said. “I told Tom I could not support his return to the department as a road lieutenant because I strongly believe with new leadership, having a previous chief in a road position would only create confusion, conflict and division.”

In an internal affairs investigation of the deadly incident, investigators found Lewis had a “casual approach” to safety during the community event. “The Punta Gorda Police Department has an exceptional record of safety protocols when conducting officer training,” Kunik said. “But citizen demonstrations showed an inexplicable departure from those protocols.”

Knowlton had never held a gun in her life when she was randomly selected to participate in the demonstration. Coel, the officer who pulled the trigger, fired what he believed to be blanks. Two of the four rounds he fired struck Knowlton, and she died in front of her husband, who was also at the event.

Coel was charged with manslaughter earlier this year and faces up to 30 years in prison. He was fired by the department shortly after being charged.