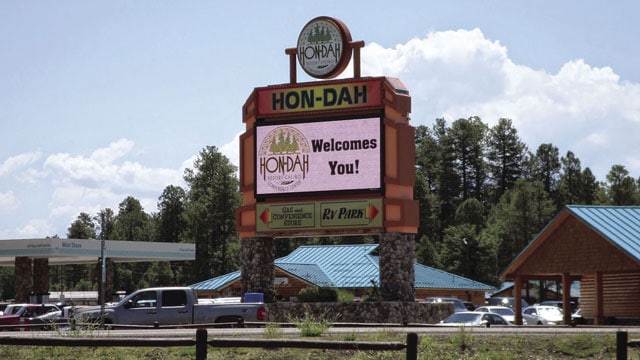 Monday’s was the second robbery the casino has seen in a little over a month. (Photo: White Mountain Independent)

An attempted robbery of an armored car outside of a casino in Pinetop, Arizona, Monday morning resulted in the shooting death of the suspect.

The incident unfolded around 10 a.m. outside of the Hon-Dah Resort Casino and Conference Center, and authorities later identified the deceased suspect as 52-year-old Buddy E. Martel.

Authorities say after the female cash courier stopped at the casino, Martel approached her near the front door and sprayed her with an unidentified chemical irritant. The guard, in turn, retrieved her holstered handgun and fired multiple shots at Martel, who fell to the ground.

Martel was pronounced dead at the scene, and the courier was treated for minor injuries. No one else was harmed during the incident, which was witnessed by at least two people. Authorities believe Martel acted alone, although they did not say whether the courier was guarding the armored truck alone.

According to the White Mountain Independent, the attempted robbery was the second such occurrence at the casino in just over a month.

On July 11 around 3:30 p.m., a black male wearing a suit, white shoes, and a head covering walked out with an undisclosed amount of cash after robbing a cash cage at the casino, which is located on the Fort Apache Indian Reservation and owned by the White Mountain Apache Tribe. Authorities say the robbery lasted less than 90 seconds and the suspect still remains at large.

When asked if Monday’s robbery may have been related to the July robbery, Phoenix FBI representative Jill McCabe didn’t say that it was, but also said the investigation is ongoing and authorities “are not ruling anything out.”