Finding the 'best home defense gun' with the Warrior Poet 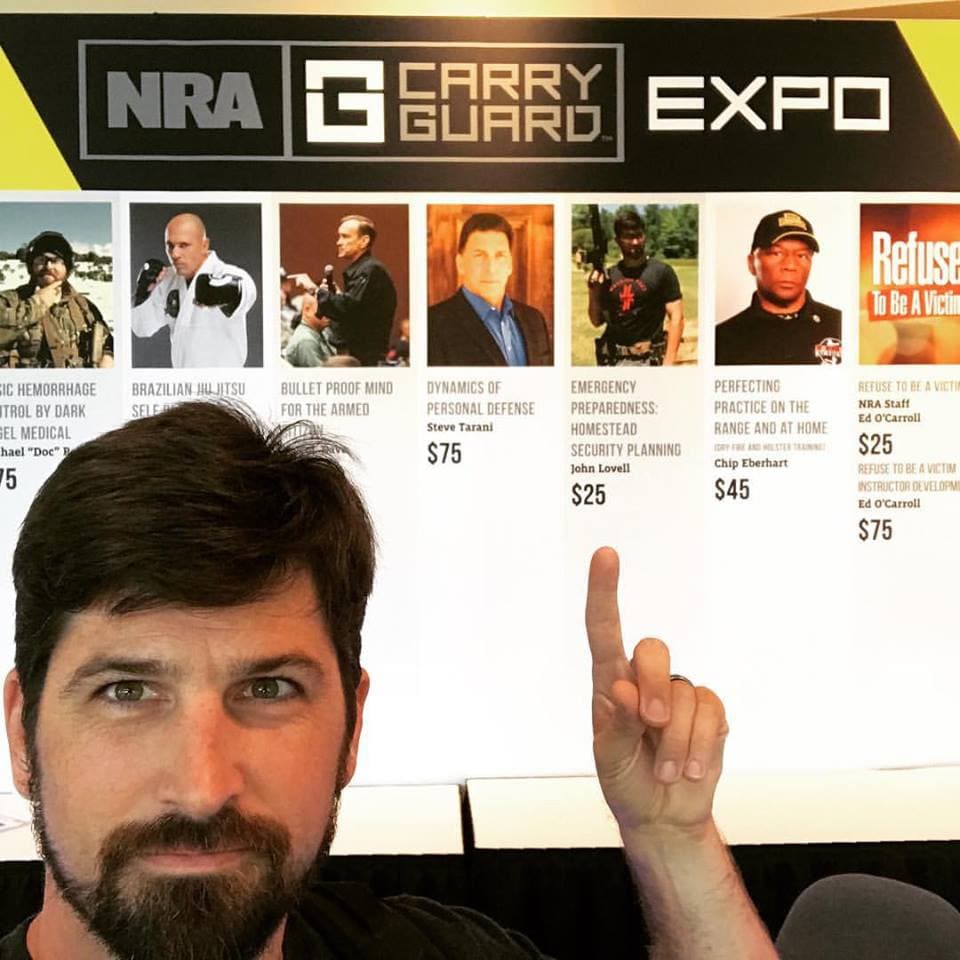 What is the best home defense gun? There seem to be a lot of answers, which makes a final decision difficult. But John Lovell, founder of the Warrior Poet Society and credentialed full-time tactics and weapons instructor, provided a way to find an answer during his seminar at the NRA Carry Guard Expo last weekend in Milwaukee.

The debate will rage eternal on the best gun for this or that.  But Lovell comes at the subject with a wide perspective: his strong military and tactical background; his role as a protective father and husband; and his experience as a civilian trainer to every level of student.

For the purpose of this seminar and the essence of time, Lovell kept things to three basic and common home defense weapons for the average citizen: a pump shotgun loaded with buckshot, a semi-automatic pistol like the Glock 19, and an AR-15 platform rifle with a 30-round magazine.  Here are the points he raised on choosing the best.

ONE: The majority of home invasions occur in the middle of the day and the front door is the most common point of entry.  Will you be prepared when you may have only 2-3 seconds to respond?  The question here is not which weapon is best, but will you even be able to get to your weapon?  Where will you stage your weapon(s) in different areas of your house?  Consider your response if you’re, say: in the kitchen, with the kids, in the back yard, or sitting on the couch.

TWO: For lethality, no other weapon trumps a shotgun loaded with buckshot, shot for shot.  Lovell references numerous law enforcement and military experiences wherein attackers are shot multiple times in critical areas with calibers from 9mm to 45 acp and are not incapacitated.   For greatest lethality and best accuracy in high-stress, adrenaline-pumping scenarios, Lovell sings the praises of the shotgun.   For shooters where recoil might be an issue, he encourages use of a 20-gauge over a 12.

THREE: When Lovell polled seminar attendees at the beginning for their choice of the “best home defense gun,” the overwhelming majority chose a handgun.  He is quick to point out, however, that based on both lethality and the amount of training required to fire a handgun accurately under pressure, the handgun has much more limited use as a defense weapon than people think.  Lovell makes a strong case to choose the shotgun or AR-rifle in its stead, with the sole benefit to the handgun being its concealable size.  Before you lose your collective minds, remember that Lovell has trained hundreds, if not thousands, of everyday citizens and has seen the difficulty with accuracy in speed and pressure scenarios.

FOUR: This may seem simple, but the best gun is also the one with which you’re most familiar.  As Lovell referenced, if you’re a shotgunner who hunts upland birds, shoots clays, and has never handled a pistol or AR, then a scattergun is the clear choice.  For ex-military personnel, you’re likely most capable with, confident in, and able to handle an AR-rifle.  Use what you know and know what you use.  And don’t just shoot paper.  Lovell repeated several times that just because you can punch bullseyes on the range does not mean you’re prepared for defense.  Practice shooting from unconventional positions, under duress, and with strict time limitations.

FIVE: With his military and tactical training, its no wonder John Lovell knows his way around a modern sporting rifle and touts the AR-platform as his ideal home defense gun.  His reasons, though, make good sense.  First, the .223/5.56 chambering is the one with the least recoil and thus easiest to get back on target.  And second, with standard 30-round magazines, they have by far the greatest capacity.  Lastly, AR’s are customizable in size to most shooters, and things like optics, lights, and lasers are easy additions.

SIX:  Though Lovell’s seminar was on choosing the best home defense gun, some of his best tips had nothing to do with a gun at all; but rather, with securing your home.  What can you do? Eliminate ambush points, by lighting up dark areas of your yard and trimming overgrown bushes.  Don’t be predictable—something as simple as letting your small dog out of the same back door every night at the same time makes an easy target for a home invader.  Break your home and yard into different “zones” and know how you would respond to a threat from each zone, and make sure your family has a plan of response as well.

Lastly, use whatever means of security you can—a monitored security system with alarms inside and out is best, but also consider panic buttons that will create noise alarms, safe rooms, and even stashing large cans of pepper spray throughout the house.  And Lovell’s number one rule, keep your weapons away from your children, period.