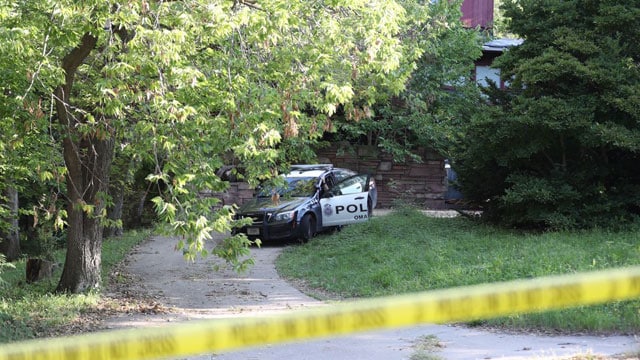 The victim’s home is slightly hidden from view and, according to reports, has been deemed unsafe by the city. (Photo: Omaha World-Herald)

A 25-year-old man is recovering from a gunshot wound after he broke into an Omaha home Thursday morning and found the homeowner was armed with a gun. He’s the second suspect the homeowner has put in the hospital this week.

According to the Omaha World-Herald, it was the third time the home was broken into in three days, but authorities have not said whether they believe the break-ins are connected.

In the latest incident, police responded to a call from homeowner Renard LeBron around 8:15 a.m. Thursday and found the suspect, John McDonald, 25, suffering from a gunshot wound to the stomach. He was transported to the hospital, where he was last listed in serious condition.

At the time of the break-in and subsequent shooting, McDonald was wanted for failure to appear at a court hearing for a possession of methamphetamine charge.

When McDonald was shot, LeBron’s face was still bruised and swollen from an encounter with another burglar Tuesday morning. In that incident, LeBron returned home to find Kenneth Harlow, 56, upstairs.

Harlow was wielding a baseball bat, with which he used to beat LeBron, but the homeowner fought back. David Gilliam, LeBron’s friend, told reporters LeBron used a screwdriver to fight off Harlow, who also ended up in the hospital.

“Maybe they just thought he was an easy target. I don’t know. He’s put two in the hospital so far, so he ain’t so easy,” Gilliam said, as he chuckled as he talked with reporters.

The third break-in occurred Wednesday morning, but LeBron never saw the suspect, only his or her vehicle parked in the man’s driveway. The blue sedan drove off before LeBron had a chance to confront anyone, but officers later found pry marks on an open door downstairs, indicating someone had forced entry. It’s unclear if anything was taken during that incident.

Most neighbors say LeBron is a friendly guy, but others say the string of recent break-ins seems suspicious. However, reports also point to a sign outside of LeBron’s home that indicates the house has been condemned, which could lead criminals and would-be squatters to think the home is empty.