AM General nabs $2.2B deal to produce Humvees for U.S. allies 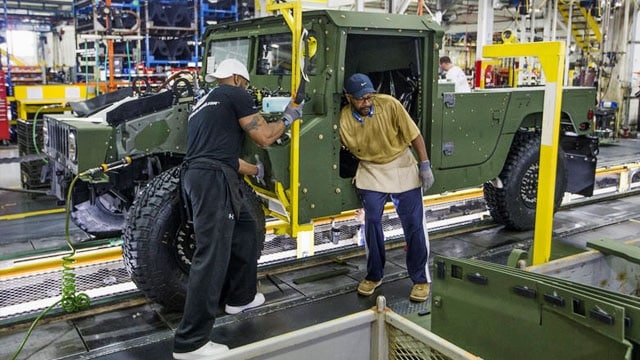 Assembly line workers put together a Humvee at an AM General plant outside South Bend, Indiana in April. (Photo: Robert Franklin/South Bend Tribune)

AM General, a company that makes specialized vehicles for the military, scored a $2.2 billion deal with the U.S. Army this week.

The South Bend-based company will manufacture 11,560 new High Mobility Multipurpose Wheeled Vehicles over the next five years, according to the Department of Defense. The company will produce the Humvees for foreign military sales customers, the first of which is Afghanistan.

“The HMMWV continues to be the most sought after light tactical vehicle for military and government customers around the world demonstrating its relevance and reliability while ensuring readiness at an affordable price for the U.S., our allies and coalition partners,” said AM General President and CEO Andy Hove in a statement.

As part of the order, AM General will manufacture “a wide range of variants including protected weapons carriers, cargo transporters, communications vehicles and ambulances.”

There are more than 250,000 HMMWV’s in use in more than 60 countries worldwide. The vehicles boast “significant improvements to power, performance and payload” while also having mine blast and ballistic protection.

The estimated completion date for the contract is Feb. 28, 2023.

The DoD on Thursday also announced a more than $14 million deal for high mobility multi-wheeled vehicle truck engines from AM General for the U.S. Army.