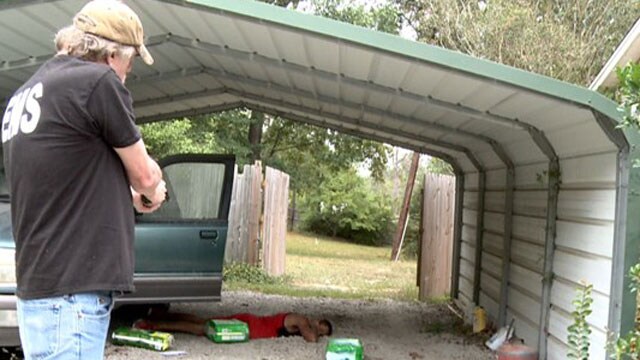 South Carolina authorities credit a legally armed citizen for helping to catch a wanted fugitive outside of a home in Kershaw County last week.

Christopher Alexander Cravets, 21, along with a second suspect, Cody Gene Jackson, 26, have been on the run since a violent armed robbery on Aug. 18 in which a female victim was pistol whipped, according to the Kershaw County Sheriff’s Office.

When authorities tracked down the suspects at a Kershaw County home Tuesday, both men tried to flee on foot. Jackson only got few hundred yards before a deputy caught up him, but Cravets managed to escape, prompting an hours-long manhunt, which included police dogs and helicopters.

Sheriff’s deputies searched the area and warned residents, including Charles Belcher and his girlfriend, that a dangerous fugitive was on the loose. Belcher went to his truck, grabbed his gun and then returned to his house.

Belcher said it was only about two minutes after the deputies left when he went outside to check the cars on the property and found Cravets in the back seat of an SUV. Reporters with local media station WLTX happened to be nearby and captured the tense confrontation on video.

Belcher ordered Cravets out of the car and on the ground, where he held him at gunpoint until deputies arrived a short time later. No shots were fired and no one was injured.

“The only thing I was worried about was if he had a gun and if he was going to try and shoot me or whatever, which I was hoping that we weren’t going to go to that distance,” Belcher said after the incident.

Kershaw County Sheriff Jim Matthews said Belcher “did a heck of a job,” and said they will never turn down civilian assistance in such situations.

“We need all of the help we can get, and this guy stepped up to the plate, and he did the right thing,” Matthews said.

Jackson and Cravets, both of whom have lengthy criminal histories and served prison time for violent crimes, according to local media, are charged with armed robbery, possession of a fireman during the commission of a violent crime, and second-degree burglary.