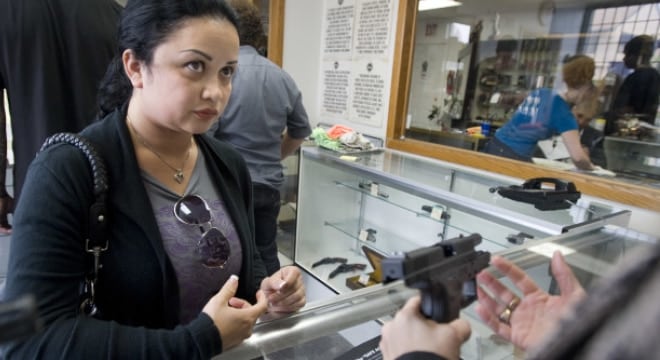 Even if they already own a gun, Californians continue to have to wait 10 days to buy additional firearms.(Photo: Jebb Harris/The Orange County Register/AP)

The plaintiffs, Jeff Silvester and Brandon Combs, who feel the state’s 10-day waiting period for gun purchases is a violation of their rights, sent their long-running fight with the state’s attorney general to the Supreme Court last week.

Supported by the Calguns Foundation, of which Combs is the executive director, and Second Amendment Foundation, they argue the wait — if applied to those who already lawfully possessed a firearm registered in the state’s Automated Firearms System or had a concealed carry permit — is a violation of the Second Amendment.

“While this case is about waiting periods, it is also about something more,” said Alan M. Gottlieb, SAF founder, and executive vice president, in a statement. “It’s about challenging a gun regulation that is designed more to discourage exercise of the Second Amendment than it is about preventing crime.”

The men filed suit against the state in 2011, arguing that California’s waiting period and the 18 exemptions to it violated the Equal Protection Clause of the Fourteenth Amendment. The state countered the elapsed time was a viable means of reducing suicides and murders.

In 2014, U.S. District Judge Anthony Ishii found in favor of the gun owners, saying: “There is no evidence that a ‘cooling off period,’ such as that provided by the 10-day waiting period, prevents impulsive acts of violence by individuals who already possess a firearm.”

Though Ishii ruled the already-standard practice of a federal background check was sufficient in most cases, largely abandoning the 10-day rule, California brought the matter to the 9th U.S. Circuit Court of Appeals who last December reversed the lower court’s decision saying the waiting period was a “reasonable safety precaution for all purchasers of firearms,” even if they already had a gun or a permit.

With a request for a retrial denied earlier this year, the only avenue left for the plaintiffs is the Supreme Court.

Pointing out that most checks take less than an hour to complete, attorney Erik Jaffe in the filing noted that the “application of the full 10-day waiting period to firearms purchasers who pass their background checks and already possess another firearm or a CCW license involves no meaningful risk to public safety.”

California has had some form of waiting period statute for firearm sales since 1923. Initially, the law required a one-day wait for handguns, but lawmakers expanded it incrementally to three-, five- and later 15-days. Then, in 1991, to include all firearms. The only reform came in 1996 when, with the increased availability of electronic checks, it was reduced to the current 10-day mandate.

Now on its way to Washington, the odds of the challenge being heard by the court are slim.

Although the Supreme Court receives thousands of petitions each year, the number granted is few, typically 100 or less. Granting a petition requires the votes of four Justices, something the court has declined to do in several recent gun rights cases sent up from the Circuits.