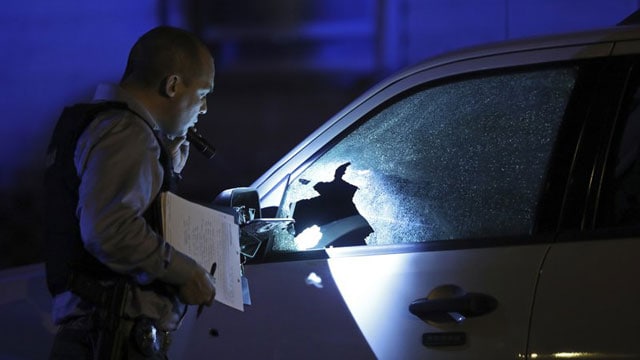 Authorities investigate after a shooting in Chicago, one of 28, over the weekend. (Photo: AP)

While Chicago experienced more than two dozen shootings over Labor Day weekend, the number was far less than the city saw during the same holiday weekend last year.

From Friday to early Tuesday morning, 45 people were shot and seven were killed, according to the Chicago Tribune. In comparison, the Windy City saw record-breaking violence last Labor Day weekend when 65 people were shot, 13 fatally.

“This is not a victory, it’s progress in the right direction,” Kevin Navarro, First Deputy Superintendent of Police, said in a press conference.

Authorities credit a number of efforts for the decrease in violence, including an extra 1,300 officers on patrol in high-crime areas of the city’s South and West sides, as well as numerous undercover operations ahead of the holiday weekend that led to the arrests of 170 people. Of those arrested, 90 had prior felony convictions, the Associated Press reported.

“These were individuals targeted based on information from the (police) districts to be part of gangs, known to be in gang conflicts or linked to or contributing to violence in those districts,” said Chicago Police Department spokesman Anthony Guglielmi.

Authorities seized more than 100 illegal firearms over the weekend. Throughout the summer, the city has also employed an expanded gunshot detection system, as well as more street cameras in an effort to help tackle the record-breaking violence that has thrust the city into the national spotlight.

So far this year, at least 2,480 people have been shot in Chicago and there have been 474 homicides. Likewise, records for 2016 show more than 4,300 gunshot victims and almost 800 homicides for the year.