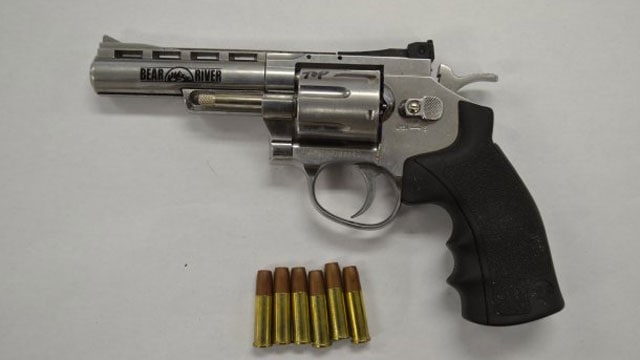 One of two BB guns recovered at the scene. (Photo: Vermont State Police)

A suspect who was killed after an hours-long standoff in Poultney, Vermont, had been armed with a BB gun, the Vermont State Police said last week.

The Vermont State Police identified the deceased suspect as Michael Battles, 32. Battles, who was on probation at the time of the shooting, has what was described as “an extensive criminal history,” including felony convictions.

The incident unfolded after the Rutland County Sheriff’s Office received a call about a domestic complaint late Thursday night. The deputy who first responded to the call located the victim at a neighbor’s home, and an interview with the victim revealed that she had been beaten, choked, and left with “visible injuries” to her face and body by Battles, who was her fiance. The victim told the deputy she fled on foot after Battles threatened to kill her and she feared for her life.

However, Battles reportedly caught up with the victim in front of the neighbor’s house, where he continued to assault her and drag her across the yard, all of which was witnessed by the neighbor, who intervened. At some point before authorities arrived, Battles went back to his own home.

A Vermont State Trooper also responded to the domestic call and, after speaking with the victim, the trooper and the deputy went to speak with Battles at his home. However, knocks at the front door went ignored.

A short time later, Battles appeared at an open, second-story window, and began yelling at the officers, who noted Battles was visibly angry and agitated. He expressed concern that the officers would not give him a chance to tell his side of the story and simply arrest him. Battles then closed the window, and the officers moved back toward their patrol vehicles.

Soon thereafter, Battles opened the window and again yelled at the officers. He told the officers he had an “arsenal” and said if they came for him, it would be “real hard and he would have to give it to the officers,” Major Glenn E. Hall with the Vermont State Police wrote in a press release. Battles also tapped something on the window which the trooper and deputy believed was a weapon, causing them both to take cover and call for immediate assistance from multiple agencies, including a Crisis Negotiation Unit.

However, Battles barricaded himself inside the house and dismissed requests for him to give up peacefully. Battles was adamant that if he came out, it “wouldn’t end well.” During the standoff, while still yelling out of the upstairs window, Battles made mention of suicide by cop, that he had “nothing to live for,” and that officers would have to shoot him. He also indicated he was armed and willing to use deadly force against the officers.

Shortly after midnight Friday, a judge signed a search warrant for the home, and after more than an hour of additional attempts to get Battles to surrender, officers breached the front door of the residence with a tactical vehicle. At that point, Battles briefly walked out onto the porch, but returned inside the home, still refusing to come out. As he stood in the hallway, officers observed what appeared to be a holster on his hip, although nothing was seen in his hands at that time.

About 20 minutes later, as officers remained outside of the residence, still trying to get Battles to surrender, he again went the second story window, this time holding what appeared to be a revolver aimed at the officers below. Fearing for their lives, State Troopers opened fire, striking Battles, who immediately fell to the floor.

Battles was pronounced dead at the scene and officers found him holding a weapon, with a second holstered gun on his hip.

According to the Rutland Herald, both handguns were later determined to be BB guns, and a muzzleloader was also found near Battles’ body.

As is State Police policy, the troopers who fired their weapons have been placed on administrative leave. The incident remains under investigation, and, once completed, will be turned over to the Rutland County State’s Attorney and Attorney General’s Office for review.