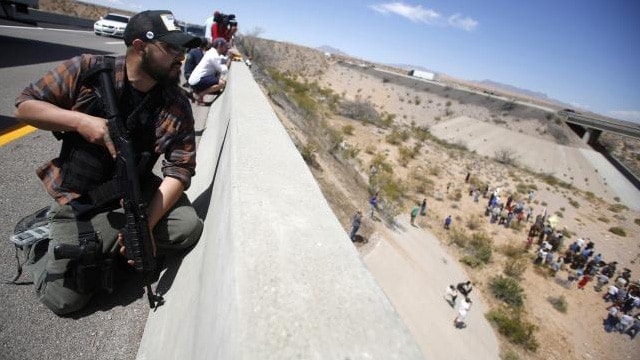 Eric Parker, of Hailey, Idaho, kneels on a bridge with his weapon watching over ranchers and BLM agents during the 2014 Battle of Bunkerville. (Photo: Jim Urquhart/Reuters)

A third of all the state lawmakers in Idaho are calling on Attorney General Jeff Sessions to intervene in the ongoing trials and possible retrial of four men charged or convicted in connection with the 2014 Battle of Bunkerville.

In a letter dated Aug. 29, a total of 34 current and five retired lawmakers urged Sessions to get federal prosecutors in Nevada to stop pushing for convictions.

“We believe that the decision by the current U.S. attorney of Nevada to prosecute these men a third time represents disrespect for the rule of law and the jury system,” the letter says.

The “Battle of Bunkerville” was a six day standoff between dozens of armed ranchers and U.S. Bureau of Land Management officials in April 2014. People came from all over the country to support rancher Cliven Bundy, who spent decades refusing to pay grazing fees to the federal government. BLM agents arrived to round up cattle in lieu of those payments, but armed ranchers got in their way. The incident ended without a single shot being fired, but nearly 20 people have been arrested and charged in connection with the standoff.

In April, Todd Engel, of Boundary County, Idaho, was found guilty of obstruction and traveling across state lines in aid of extortion. He’s set to be sentenced later this month. In that same trial, the jury deadlocked on charges for Scott Drexler, Eric Parker, and Steven Stewart — all of them from Idaho.

In a retrial last month, Stewart was acquitted of all 10 counts against him, while the jury again deadlocked on a handful of counts each for Parker and Drexler. Ammon Bundy, from Emmett, Idaho and the son of Cliven Bundy, is set to be tried with his father next month.

“A third trial (for Drexler and Parker) would show blatant disregard for tax funds collected from hard working law abiding citizens who are represented by these juries whom have found them innocent of 34 of the 40 charges and hung by the very slimmest margins in those where the jury stood deadlocked,” says the letter from the lawmakers.

“I think it is a complete injustice and a waste of taxpayer money and time to continue to go after these guys after two mistrials,” Rep. Judy Boyle told the Idaho Statesman. “Let it go. We are not talking about murders, robberies, druggies, rapists. It is continuing to waste the court’s time and federal taxpayers’ money. I know the federal government wants to make a point, but get over it.”

The lawmakers asked Sessions to “have those in charge of this case end this long enduring action and set Eric Parker and Scott Drexler free, set reasonable bail for Ammon Bundy and allow Todd Engel to use his time served as total sentencing.”