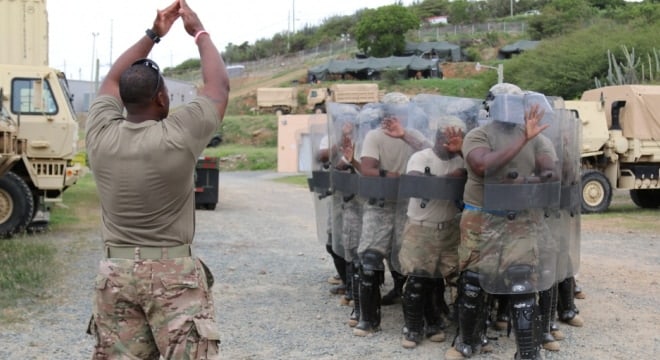 Second Amendment groups are in arms over orders given by the Caribbean territory’s governor activating the islands’ military forces and granting them emergency powers.

With powerful Category 5 Hurricane Irma tracking for the islands, Gov. Kenneth Mapp (I) called out the 1,000-member Virgin Islands National Guard and, as first reported by the Daily Caller, issued orders to Adjutant General Deborah Howell on Monday that the force is “authorized and directed to seize arms, ammunition, explosives, incendiary material and any other property that may be required by the military forces for the performance of this emergency mission.”

The news was immediately greeted with a broadside from the nation’s largest gun rights group, who threatened legal action. Describing Mapp’s order as “dangerous and unconstitutional,” the National Rifle Association condemned the move, pointing to past litigation concerning guns seized in New Orleans during Hurricane Katrina in 2005.

As the island government’s social media pages experienced a backlash from concerned citizens over the order, Mapp’s administration clarified the nature of the instructions late Tuesday.

“As a matter of law, when the National Guard is activated in an emergency situation they are granted the power to seize weapons and other materials they deem necessary to carry out their mission,” says the post. “Such an order is executed EVERY TIME the V.I. National Guard is activated. Anyone that says otherwise is simply trying to create confusion during what is already a very stressful time for us all. Those with concerns about this provision of the VI Code should bring them to our law-making body following the storm.”

The territory, with a population of about 100,000, suffered from days of unrest following the devastation from Hurricane Hugo in 1989. President George H. W. Bush ordered in a force of 100 U.S. Marshals bolstered by 1,200 Army paratroopers from Fort Bragg to curb rampant looting that allegedly included members of the local police and National Guard.

As of Wednesday morning, the National Hurricane Center listed Irma as having sustained winds near 185 mph, with both the U.S. and British Virgin Islands under a posted Hurricane Warning. According to Mapp’s office the important hubs of St. Thomas and St. John are “likely to experience hurricane force winds in excess of 100 mph on Wednesday afternoon.”

Officials in the islands established a 36-hour curfew, at a minimum, for the entire territory beginning at 6 a.m. Wednesday.