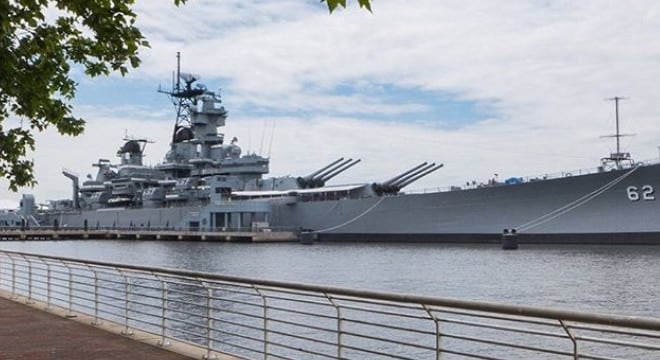 The USS New Jersey began her naval career in WWII with 49 20mm Oerlikon cannon. She now has part of one. (Photo: Battleship New Jersey Museum)

The historic capital ship is looking for some parts for one of their WWII-vintage anti-aircraft guns to complete their display.

Docked in Camden, New Jersey across from Philadelphia, the Battleship New Jersey Museum and Memorial has an 888-foot battlewagon full of armament that includes nine massive 16-inch and 12 5-inch guns, but what they are missing is a complete 20mm Oerlikon cannon. Although the ship was commissioned in 1943 with 49 of the kamikaze-killing Oerlikons, as well as 80 40mm Bofors cannons, the guns were removed in 1968 when she was modified for use off the coast of Vietnam. Though the museum has managed to score one of the New Jersey’s 40mm mounts, they are coming up short in the 20mm department.

“The ship would like to create an exhibit that features all of the anti-aircraft defenses used on board during World War II,” said Clark Perks, development director at the museum, in an email to Guns.com. “With the Quad 40, and the 5-inch guns, the ship has two of the three weapons used for anti-aircraft. What is missing is a 20 mm Oerlikon gun.”

But they don’t need the whole thing: the museum has the gun itself but needs the gun mount and armor shield to complete it.

While thousands were made during WWII, Oerlikons are pretty rare in the wild today as most were scrapped in favor of the belt-fed and more powerful Mk16 cannon back in the day and few made it to civilian hands.

Due to their extremely dangerous recoil system for those unfamiliar with them and shortage of any viable factory ammo, they aren’t very popular to shoot in NFA circles when compared to more readily available Finnish Lahti, Swedish CG M42, and Solothurn 20mm guns, but there are a few in circulation and they do come up at auction from time to time.

However, as Perks said they don’t need an intact transferable Class 3 destructive device, just the mount, and armor. “We would even be happy to have a replica if we could find one,” he said. “If we could borrow one, we could probably even build a replica from scratch.”