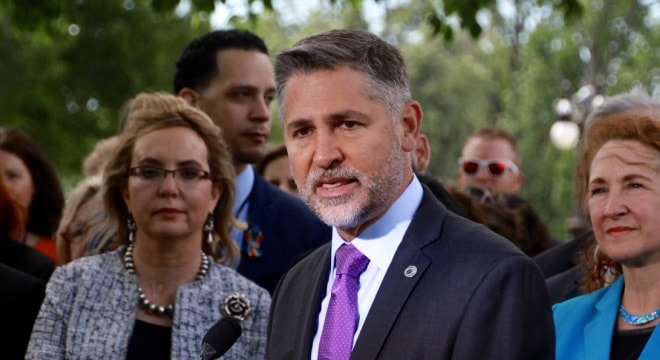 Dan Gross, seen at an event with former U.S. Rep. Gabby Giffords in May, is no longer Brady president. (Photo: Brady Campaign via Twitter)

The national gun control group founded to implement background checks on gun sales has replaced the public face of the organization this week.

The board of trustees of The Brady Campaign and Center to Prevent Gun Violence announced Wednesday that Dan Gross, president of the group since 2012, has stepped down.

Taking his place will be internal staffers, Kristin Brown and Avery Gardiner, who will serve as co-presidents. Brown was previously the organization’s chief strategy officer while Gardiner was the group’s chief legal officer.

“The Brady Campaign and Center’s mission to cut gun deaths in half by 2025 has never been more urgent,” said Kevin Quinn, chairman of the board, in a statement. “Brady has a focused strategy to prevent gun violence, and we need strong leaders with exceptional strategic and operational skills to achieve our goals.”

The group will reportedly refocus their efforts on expanding background checks to all gun sales, reforming what they term as “bad apple” gun dealers, and working to, “change the cultural perception that a gun in the home makes you safer.”

As noted by his biography that has since been deleted from the Brady website, Gross came to the organization when it merged with the Center to Prevent Youth Violence, a gun control group he helped found in 1998. In his time at the helm of the Brady Campaign, Gross has been a very public champion on the effect of background checks on gun deaths and the push to expand them to all transfers while stumping for increased security for stored firearms.

The group has also been heavily involved in litigation including Florida’s “Docs vs. Glocks” case over health care workers’ rights to talk to their patients about guns as well as lawsuits against gun stores over straw purchases, with mixed results.

Among the more embarrassing legal defeats suffered by the group was in backing the parents of an Aurora movie theater shooting victim in a federal lawsuit claiming negligence on the behalf of the online vendor who sold the murderer his ammunition. After the lawsuit was rejected by the courts, the parents were reportedly left bankrupt due to legal fees and some arguing the Brady’s left the couple high and dry.

“Mr. Gross has been an important and influential leader in the gun violence prevention movement for many years, has led Brady, and leaves the organization poised for even greater success,” Quinn said.

Gun rights leaders, who contend they have tried to debate Gross on numerous occasions, welcomed the change in Brady’s leadership in the hopes of opening a dialog but aren’t holding their breath.

“They are doubling down on the same old tired anti-gun rights mantra with the same old tired failed leadership,” Alan Gottlieb, founder of the Second Amendment Foundation, told Guns.com. “Some things never change unless they change the name of their organization which they have done before. But maybe now with two talking heads they will no longer be afraid to come out and debate.”