Dispatches from gun country: 'Rights are like muscles: you lose them if you don't exercise them.' Pt. 1 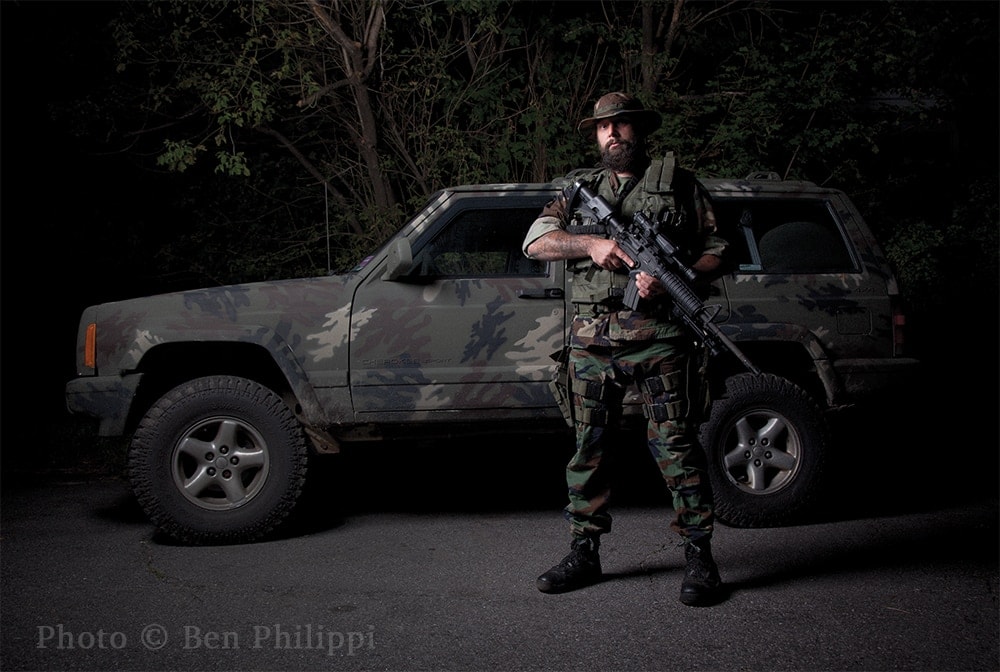 Ryan Dean is a patriot who exercises his constitutional rights as often as possible in his home state of Maine. He cruises around town in his 2000 Jeep Cherokee that he custom painted himself with rattle cans and pizza boxes from which he cut camo stencils.

Growing up in a small Maine town, guns were ever present, at home and abroad. A community and family filled with shooters, sportsmen and hunters it was the norm and I never thought twice seeing rifles and shotguns in trucks or over the shoulder of someone walking the road. And it certainly never raised suspicion seeing a group of armed men outside any local store.

As a boy I was always fascinated with guns. I was curious of their power and purpose. I started shooting as many American youth, with BB guns and .22’s. All of my thanks needs to be given to my father for teaching me everything I needed to know and more, especially to respect firearms and their potential lethality. They are tools, not toys.

I always knew my rights and now exercise them daily but I never knew the real importance of my rights and protecting those rights until I became a parent. Much like my father did for my brother and I, I will pass on my knowledge, passion, views and beliefs to my daughters, defending The Second Amendment and educating everyone I can along the way. I firmly believe that the number one killer of our so-called inalienable rights is lack of education.

We have a massive society of people that let their rights be eroded from beneath them because they don’t know any better. They think, ‘Well the government says so, so it’s got to be OK.’

WRONG. WRONG. WRONG!!!!! In essence what The Second Amendment means to me is the ultimate path to freedom, an ideal held in high regard by our forefathers that we must not let slip away. Your rights are like muscles: you lose them if you don’t exercise them.