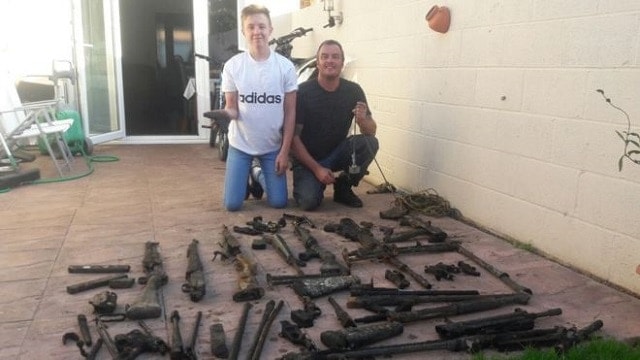 Neil Hopkins poses with his son Billy after finding WWII gun parts in a river near their home in south west England. (Photo: Hopkins/BBC)

A father and son have found a cache of World War II gun parts in a river near their home in south west England.

The pair found around 30 gun parts Friday evening while fishing with magnets in a river near Grey Lake in the southwestern Somerset county of England, BBC News reported.

The father and son alerted local police, who said the latest discovery appeared to be part of the same cache of gun parts a group of boys discovered in 2015. Police divers dredged up around 80 weapons after that initial finding, including rifles, pistols, and a machine gun.

Experts said some of the guns from the 2015 discovery were from a period after WWII. Those firearms included a Czech Vz.25 submachine gun, a US M16 rifle, and a Belgian FN CAL.

Neil Hopkins, 43, said he and his son Billy were fishing in the river with a powerful magnet, able to lift 220kg, when they found the guns and lifted them from the water. Hopkins said he was surprised by the find, as he thought all the gun parts had been dredged from the river in 2015.

A police spokesman said the firearms parts possibly dated back to the World War II era and may have been made at a nearby weapons factory during the war. All the weapons will be examined prior to destruction.