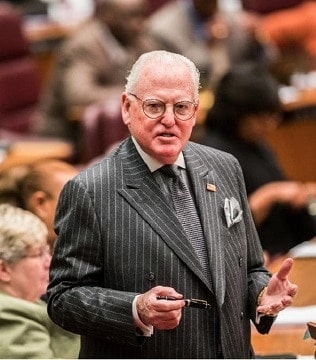 Two Chicago aldermen are pushing an ordinance that would ban guns and other weapons from all protests held in the Windy City.

The aldermen, Finance Chairman Edward Burke and Public Safety Committee Chairman Ariel Reboyras, two of the most powerful in the City Council, introduced the ordinance Wednesday and want all Chicago protestors and others involved in public demonstrations to be prohibited from carry guns and other weapons.

The move comes as a direct response to the violent protests in Charlottesville and aims to follow the example set by Boston’s prohibition of weapons at a recent Free Speech rally.

In the ordinance, the alderman propose that Chicago should implement the ban to try and prevent a repeat of the violence that erupted in Charlottesville, where one woman was killed and 19 others injured when a neo-Nazi drove a car into a crowd of counter-protesters.

“We have already seen violence and even death at these rallies,” the preamble to the ordinance states. “But, the potential is far worse if participants continue to carry guns into such confrontational situations,”

The preamble continues: “Whereas, a municipality has the authority to forbid public demonstrations that might disrupt a school or hospital, it can ban the use of loudpeakers in a residential neighborhood at night, it can refuse to permit a demonstration that will unduly block traffic during rush hour, and can therefore similarly restrict the carrying of weapons during public demonstrations for which it issues permits.”

While some other cities have issued and are considering firearms bans at protests, other organizations have also said they will no longer defend groups who plan to protest with guns.

After defending the planners of the Unite the Right protest in court and essentially helping them obtain a permit to protest in Charlottesville, the American Civil Liberites Union said they would be looking at hate group much more closely and would no longer represent those who plan to carry guns.

The Second Amendment Foundation, one of the largest gun advocacy groups in the country, also issued a similar statement after the Charlottesville protests, with founder and executive vice president Alan Gottlieb saying the foundation could not longer support the carrying of firearms at protests.