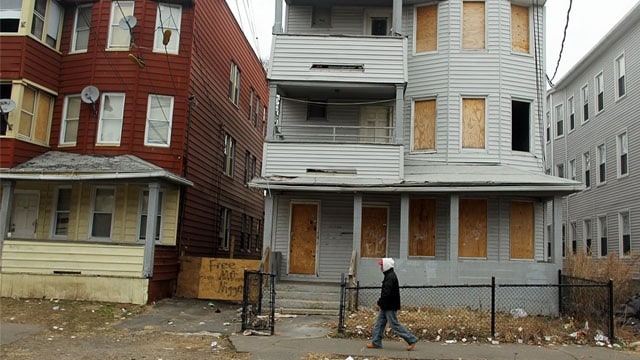 A foreclosed home on a blighted block in Bridgeport, Connecticut. (Photo: Getty Images)

While a joint federal, state and local anti-violence initiative waits for lawmakers in Connecticut to pass a budget so it can get funding, officials are applauding five employees who have continued to work without pay for several months.

“Project Longevity” aims to “provide longevity to the lives of urban black males – who too often are cut down by gun violence,” according to a joint statement released Tuesday from U.S. Attorney Deirdre M. Daly and the three police chiefs in New Haven, Hartford, and Bridgeport – which was called the “most unequal place in America” by Business Insider in 2014.

The effort began in 2012, and the state budget has allowed for seven workers: a statewide manager, three city project managers, and three service coordinators. Two of those coordinators – one in Hartford and one in New Haven — have resigned, leaving just five employees who have been working without pay since June.

“They have worked hard to forge partnerships between law enforcement, social service providers and members of violent groups to help those who want to step away from dangerous associations toward a new, law abiding life,” says the statement from Daly and the chiefs.

The group combats gang violence in the three communities by identifying individuals most at risk of causing, or being victimized, by violence. Law enforcement conducts “call-ins” for those people, and lets them know that if any member of the group carries out a violent act, then federal, state and local law enforcement will focus their efforts on that group. Social service providers also offer support for people looking to leave the lifestyle. Daly and the chiefs say the effort has seen a “dramatic decline” in violent crime in New Haven since 2012.

“Each year, our project managers conduct at least three Call-Ins, participate in hundreds of Custom Notifications, deliver anti-violence presentations to community groups and schools, and spearhead food and clothing drives,” they said.

The state budget does carve out enough money to pay the salaries of those working on the effort, but state lawmakers haven’t been able to send a budget to the governor. And the group doesn’t have any assurance that they’ll receive retroactive remuneration for the months they haven’t been paid. According to the New Haven Register, the project manager working for Project Longevity in Hartford may soon leave. Still, others are forging ahead.

“We still have things that are in motion that we can’t stop in spite of the lack of being paid,” said New Haven project manager Stacy R. Spell. “The things we are doing here in New Haven, no one else in the country is doing. … We can’t just stop because of [the lack of payment]. I can modify my hours, but I still have (to) conduct the work that has to be done.”

“It’s difficult to work at full capacity because there’s an expense related to working, whether it’s commuting costs or things of that nature,” Peterkin said. “There’s also our social services … where we facilitate services, but [then] there are some things that we offer to individuals who are looking to get out of the street life directly. We can’t do that if we don’t have a budget.”

Daly and the chiefs point to “averted medical, law enforcement, and criminal justice expenses that otherwise are incurred by the government” as the taxpayer benefit that comes from Project Longevity. One study estimated the program generated nearly $5 million in net savings for the state.

“Although this small team has not been paid for months, they have not stopped working to make our communities safer,” said Daly and the chiefs. “Their dedication to Project Longevity does not depend on a paycheck. We hope we can keep our promises to these faithful professionals.”

Peterkin said he hopes he and the remaining five employees can outlast the budget impasse.

“These are real people here,” he said. “Although we are committed and dedicated, there is a reality. We all have households, and that can only go on for so long.”