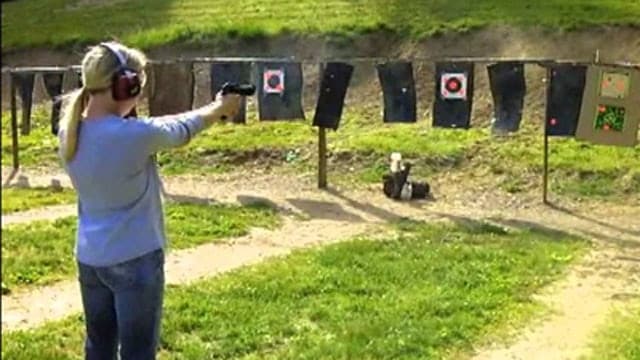 “This is a serious problem that affects all gun owners in Ohio,” said Dean Rieck, Executive Director of Buckeye Firearms Association, in a press release Tuesday. “To fully exercise your Second Amendment rights, we must have convenient access to safe, well-maintained shooting ranges. And as it stands, our aging public shooting ranges are in jeopardy.”

The association partnered with Columbus-based Sportsmen’s Alliance and other leading sporting groups in the “Protect What’s Right” campaign to raise awareness about the budget shortfall in the Ohio Department of Natural Resources Division of Wildlife, the government agency tasked with funding and maintaining the state’s network of public shooting ranges. The Sportsmen’s Alliance estimates these ranges will need $52 million in upgrades and repairs — just a portion of the $220 million budget shortfall ODOW can expect over the next decade.

Hunting and fishing license fees fund the majority of the division’s $68 million budget. Excise taxes on guns, ammunition and hunting gear provide additional dollars to support the state’s 40-plus ranges.

“Most gun owners don’t understand how funding works for Ohio’s public ranges,” Rieck said. “Ranges receive no money from the general fund in Ohio. They get their funding from the Division of Wildlife, which must spend funds on ranges then get reimbursed with matching federal funds.”

In 2016, ODOW received $22 million in wildlife restoration funds. The glaring shortfall prompted the Sportmen’s Alliance, the Buckeye Firearms Association and other groups to press state lawmakers for an increase in both non-resident and resident license fees. The request succeeded — in part — with legislators upping fees on the 40,000 non-resident hunters and anglers frequenting the state each year, raising an anticipated $40 million for ODOW over the next 10 years.

But the campaign fractured the Department of National Resources in two and allegedly resulted in the firing of eight senior officials who supported raising rates for resident hunters by a “modest” $3, according to the Columbus Dispatch.

“Ohio sportsmen and women have never had to fight so hard to convince the government to pay our own way,” Robert Sexton, a consultant with the Sportsmen’s Alliance, told the newspaper in July, noting the division hasn’t increased fees in 14 years.

Jim Zehringer, director of the Department of Natural Resources, opposed the idea, according to the newspaper, for fear of further stifling participation rates.

“Renovations have been completed at Harrison State Forest Range, Indian Creek Wildlife Area for both trap and archery, as well as Fallsville Archery Range. ODNR Division of Wildlife is in the process of making improvements to the Spring Valley and Tranquility Ranges, with future plans for nine additional ranges,” she said. “Recently, ODNR entered into a partnership with the Cardinal Shooting Center where they will honor ODNR range passes for an hour a day to ensure that shooters in central Ohio have access to a quality shooting facility while the Delaware shooting range is temporarily closed.”

Rieck said the Buckeye Firearms Foundation will donate a two-year, $10,000 grant to the Protect What’s Right Campaign in an effort to help develop strategies for addressing the ODOW’s funding shortfall.

“Whether you’re a hunter, a sport shooting enthusiast, a concealed handgun license holder, or just a recreational shooter, ranges are a vital part of exercising your rights and continuing to enjoy your sporting traditions,” he said.