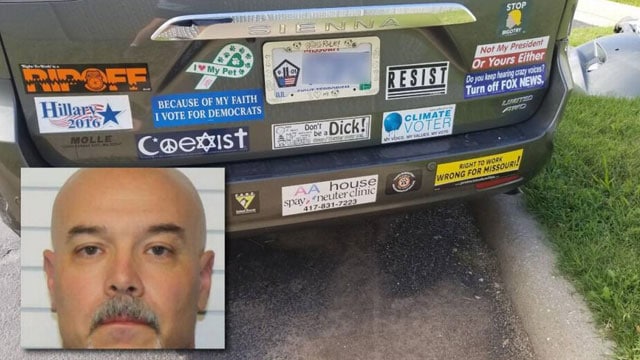 An exchange on a Missouri highway last month between two drivers with differing political views landed one woman with her car against the guard rail and a man facing charges for pulling a gun on her.

Edward Burns, of Ozark, is charged with felony unlawful use of a weapon. Burns initially denied flashing a gun, but later admitted to the act.

The incident unfolded after Burns, a conservative, noticed liberal bumper stickers on a car driven by Laura Umphenour. Burns drove past Umphenour and gave her an “L” sign to indicate he believed she was a loser. Umphenour, in turn, flipped Burns the bird. Burns then one-upped Umphenour by flashing a .380 he pulled from his waistband.

According to Umphenour, Burns’ action scared her to the point that she jerked the steering wheel and crashed into a guard rail, also striking Burns’ vehicle in the process.

Burns later told authorities that he thought the woman’s bumper stickers were “stupid” and also admitted that he “made a bad choice.”