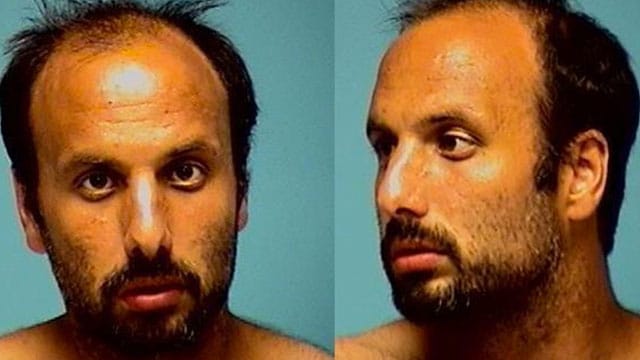 Brett F. Santo was jailed after breaking into a woman’s house two times within a week. (Photo: Elyria Police Department)

An intruder was arrested Monday night not long after he was chased away by a mom with a gun who found the man near her teen daughter inside their home in Elyria, Ohio.

It was the second time in a week that Brett Santo, 33, unlawfully entered the same home, only this time, the mother of three wasn’t taking any more chances.

Police responded to a call from Sarah Long around 8 p.m. Long was home with her 15- and 17-year-old daughters when she heard the older girl scream. Long entered the room to find Santo had walked into their home through an unlocked door.

Long ran back to her bedroom and grabbed a gun, only to return and find Santo near her 15-year-old daughter, who has a brain tumor that has caused loss of her peripheral vision and her reactions to slow.

“I said, ‘You picked the wrong (expletive) mother,’” Long told The Chronicle. “I ran after him over the bridge, and he turned around and was like, is this (woman) still chasing me.”

Long and her older daughter both chased Santo until he finally lost them, but responding officers found him a short time later. Police say Santo, who appeared to be intoxicated, admitted to breaking into the home while riding in the patrol car to the police station.

Santo, who has a prior criminal history that includes theft and heroin possession, was charged with burglary, a fourth-degree felony.

Long said Santo broke into her home last week, but was quickly chased away by her 17-year-old daughter. They didn’t call the police after that incident, but Long’s boyfriend, who she described as “a big biker guy,” decided to leave his pistol with her and told her she needed to keep it handy.

“I’m thanking God it was by a fluke he told me to put that gun by me,” Long said. “Santo was walking in there like he didn’t care, like this time he wasn’t stopping.”

It’s unclear if Santo was acquainted with Long or whether the break-ins were random.

Neither Long or her daughters were injured in either incident.