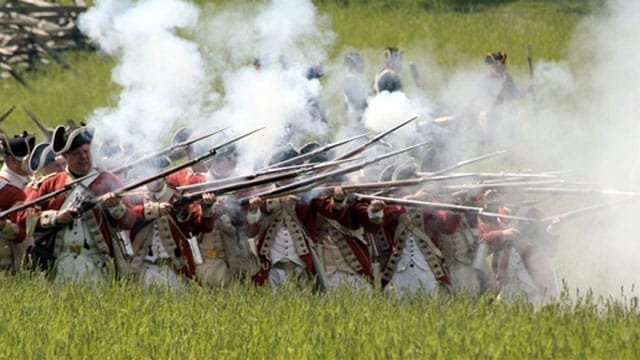 The Redcoats may have won the original battle, but next weekend’s reenactment will – just for fun – end with a British rout. (Photo: Brandywine 2017)

Birmingham Township, Pennsylvania, is set to host a re-enactment next weekend of the Battle of Brandywine, the largest land battle of the Revolutionary War.

This year is the 240th anniversary of the Battle of Brandywine, which took place on Sept. 11, 1777, and more than 800 re-enactors will share a re-creation of the historical battle on Sept. 16-17.

The reenactment is described as an “amazing battle with cannons roaring, horses galloping, and the clash of arms.”

The recreated battle, which will only last about an hour, and – keeping with historical accuracy – will end with the Redcoats’ victory, is set to take place at Sandy Hollow, which is the site of the original battle more than 200 years ago.

While the battle in 1777 was made up of an estimated 26,000 British and American soldiers, next weekend’s battle will consist of some 800 authentically dressed actors and include active calvary with cannon fire, muskets, rifles, and side arms, as well as authentic encampments and military inspections.

Those attending will get a chance to chat with George Washington, the Marquis de Lafayette, and Alexander Hamilton, among other historical figures, including period authors.

Visitors will also have the opportunity to hear the fife and drum corps, sample food that would have been eaten during the Revolutionary War period, play games, and, of course, shop.

“We held our first reenactment in the spring of 2014 and it was a resounding success so it was only natural to bring it back for the 240th anniversary,” said Linda Kaat, chair of Brandywine 2017. “Birmingham Township is once again thrilled to be able to offer a reenactment on the actual site where the battle took place, something that is extremely rare. Visitors will be walking in the footsteps of thousands of brave revolutionary men who fought valiantly here, many of whom made the ultimate sacrifice so that our country could be independent.”

The two-day event, which is presented and organized by Birmingham Township, is free to the public.