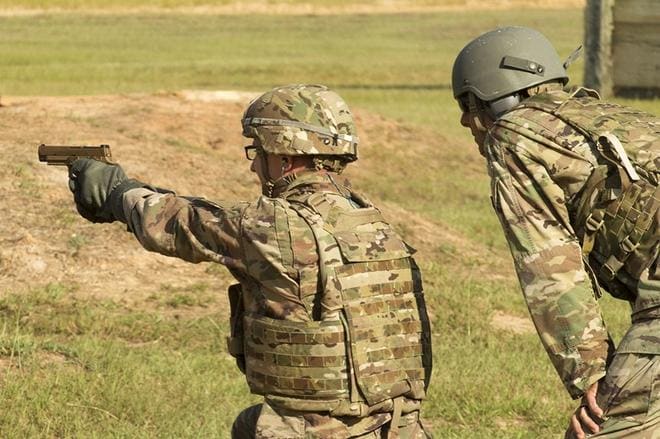 The Army is conducting an Initial Operational Test of the Sig Sauer P320 as the new XM17 Modular Handgun System this month at Fort Bragg, N.C. (Photos: Lewis Perkins/U.S. Army)

The military is introducing troops from various units and branches to the new XM17 Modular Handgun System contract winner.

As explained by the Army, service members from several commands as well from the Air Force, Marine Corps, and Navy will be at Fort Bragg over the next few weeks testing Sig Sauer’s P320 polymer-framed 9mm pistol. Those trying out the new handgun range from infantry and military police to pilots and aviation crew chiefs. 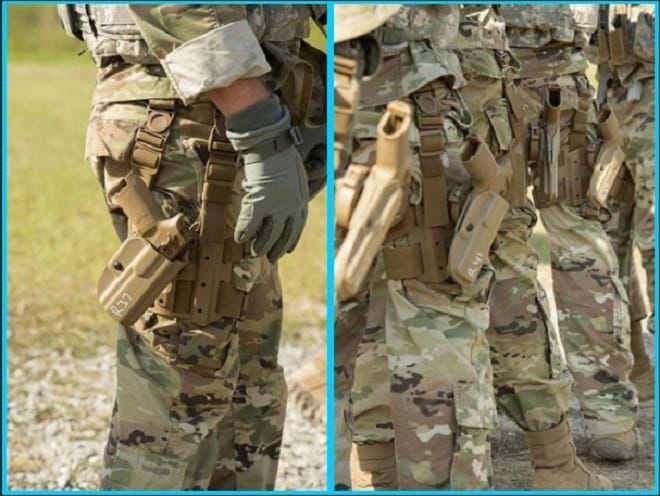 Images released show the P320 used with a kydex drop leg holster that matches the pistol’s coating scheme and magazine base pad.

Sig bested a wide field of competitors including FN, Smith & Wesson and Glock, the latter by more than $100 million on the Army handgun bid, the largest contract of its kind since the 1980s.

Addressing safety concerns over the P320 series, the company last month said they have, “full confidence in the reliability, durability, and safety of its striker-fired handgun platform.”

The XM17 is set to be issued first to troops of the Fort Campbell-based 101st Airborne Division in November as part of a 190,000-pistol initial buy. The modified P320 will then be fielded to a new installation each month until September 2018, except for next March and April.

The MHS contract, worth as much as $580 million over the next decade– and potentially more if other services adopt it– has Sig expanding their New Hampshire-based manufacturing operations.

The company has a number of production, quality control and support positions posted on their website and is set to hold employment open houses on Sept. 15 and 30.