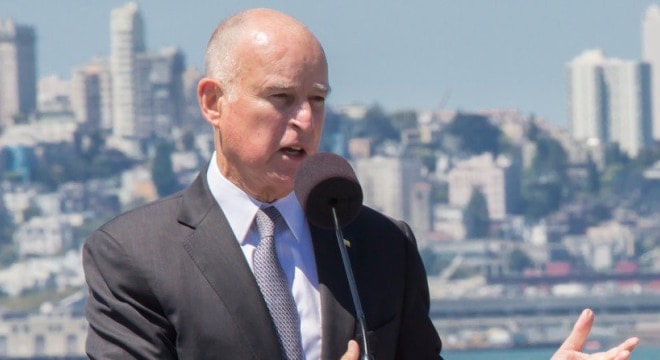 Gov. Jerry Brown, a Democrat, is set to decide on a pair of bills changing how California’s more than 3,000 FFL’s do business. (Photo: Gov. Brown’s office)

Measures aimed at the state’s licensed gun dealers have passed the California Legislature and are headed to the governor’s desk.

The proposals — SB 464 and AB 1525 — would up storage and security guidelines while ordering a change in mandatory warnings dealers must provide with firearm purchases.

Hill’s measure requires gun stores to keep their firearms in a secure facility with steel bars on windows, deadbolted doors or metal grates over entrances, and an alarm system protecting ventilation. Additional security such as steel roll down doors, locking polycarbonate gun cases, displays that utilize steel rods inserted through trigger guards or concrete bollards in front of the store are also on a list of requirements store owners must use to protect their guns when the store in closed.

Some store owners are not impressed. “All this is doing is giving some anti-gun people a warm and fuzzy feeling,” John Bastiani, who owns Bastiani Arms, told the Redding Spotlight. “It’s going to waste a lot of people’s money and it’s not going to make a building totally secure”

The bill is supported by the American Academy of Pediatrics.

The second measure headed to Brown, AB 1525, would dip into the state’s Firearms Safety Account to the tune of $70,000 to print 1.3 million new warning labels to direct those buying a gun to the website of the California Attorney General for information on complying with new firearms laws. Backed by the Brady Campaign, the move would be the latest installment of the state’s mandatory gun warning labels which have been standard since 1993.

Gun rights advocates argue the Attorney General’s website address is insufficient as information about the most recent laws passed last year is absent and the site provides little in the way of technical help.

A third measure, AB 736, would have allowed the California Department of Justice to impose fines on gun stores for relatively minor mistakes, failed to make it out of committee.

State gun dealer groups say the bills are part of an ongoing effort by the legislature to drive already highly-regulated firearm retailers out of business.

According to data from the Bureau of Alcohol, Tobacco, Firearms, and Explosives, there were 3,022 FFL’s active in California as of July 2017 including 2155 Type 1 dealers and 111 Type 2 pawnbrokers.