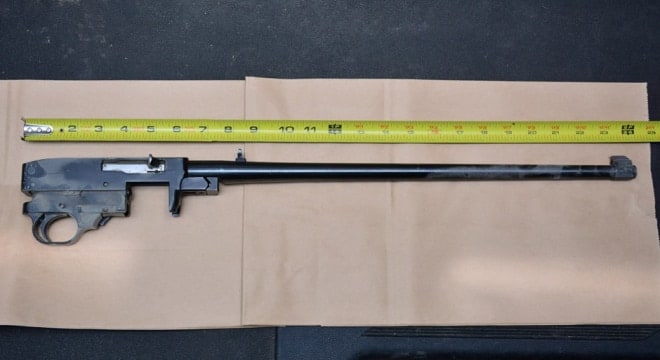 An image of the recovered Ruger 10/22, sans furniture, magazine, and stock, shows it at 24-inches long overall. (Photo: Fresno Police)

Police in Fresno arrested an area woman Monday after they found her in possession of a .22LR rifle that came up a little short on their tape measure.

As detailed in a statement by the agency, Leticia Sept, 26, was taken into custody after officers on patrol encountered her near a recreational vehicle that was parked illegally and found her with the firearm.

“As the Officers approached they saw Leticia had quickly hid a rifle on the ground next to her,” said the report. “The rifle was a Ruger .22 caliber rifle, which had been modified by having the butt stock removed. It was determined that the rifle was an illegal short barreled rifle.”

The Bureau of Alcohol, Tobacco, Firearms, and Explosives considers “a weapon made from a rifle if such weapon as modified has an overall length of less than 26 inches or a barrel or barrels of less than 16 inches in length,” to be regulated under the NFA.

California law on SBRs has the same 26-inch stipulation.

Sept, from which officers also recovered “composite knuckles and an illegal narcotic” was booked into the Fresno County Jail on charges of misdemeanor possession of paraphernalia and two weapons violations– a misdemeanor for the knuckles and a felony charge on the SBR. An inmate search at the facility shows her still in custody as of Tuesday morning, bail set at $12,000.