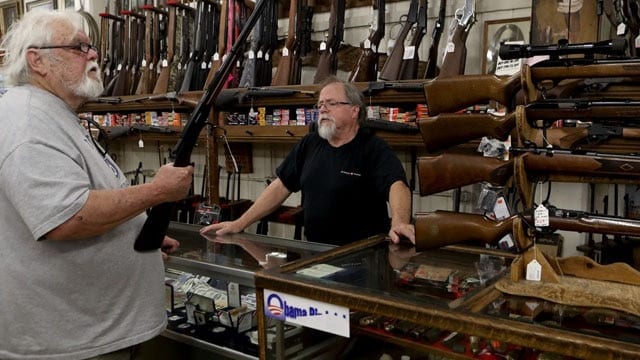 Estimated sales in August topped 950,000, a 17 percent decline from last year. Some 507,000 handguns comprised 53 percent of the firearms transferred, according to NICS. Dealers processed checks for just under 397,000 long guns, the third busiest month for the category so far in 2017.

The sales boost follows a “painful” season for gun makers and retailers, many of which reported depressed quarterly earnings, inventory backlogs and weak consumer demand compared to 2016 — the biggest on record for background checks and gun sales. Checks in June and July fell 12 percent and 26 percent, respectively, as the anniversaries of several mass shootings, legislative pushes for gun control and the ratcheting up of election season came and went. This year’s overall sales trail 2016 by 11 percent.

Both Debney and AOBC’s Chief Financial Officer Jeff Buchanan agree the worst is behind them as the promotional activity winds down. Debney cited August background check data as proof of his cautious optimism in a phone call with investors last week.

“Now there is always risk. I can’t predict the future,” he said. “I have got a crystal ball that’s not that great though sometimes. So as we think about September, October and November, those are three key data points for adjusted NICS checks that will really tell us the strength of the return of the shopper.”