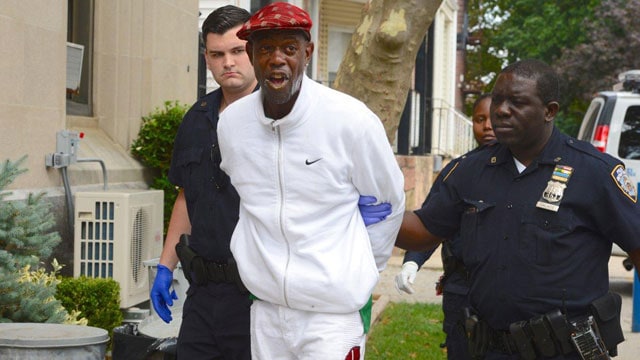 The suspect, whose name was not released, was escorted away from his girlfriend’s place of employment by police officers. (Photo: Todd Maisel / New York Daily News)

A man who walked into a Brooklyn warehouse with a gun Thursday demanding to speak to his girlfriend was punched by the woman after she realized the gun he was toting was fake.

The suspect, whose name was not released, entered H. Schrier & Company food distributor around 11:30 a.m. and demanded to see his girlfriend, an employee at the company, but the employee at the front door refused to give the suspect access to the building.

At that point, the suspect pulled out a gun and began pistol whipping the employee, cutting his head open. Soon thereafter, the suspect’s girlfriend ran into the lobby where the assault was occurring, and the suspect then aimed the gun at her.

The girlfriend, however, quickly realized the gun was fake and started punching the suspect. In fact, the girlfriend repeatedly punched the man until she was eventually pulled off of him by other employees.

The pistol whipped employee was taken to the hospital and received treatment for minor injuries, while the suspect was hauled off to jail.