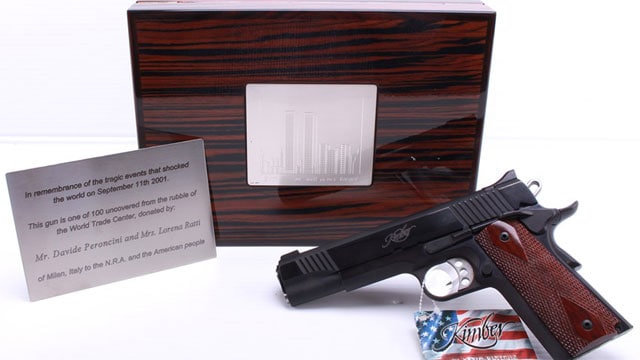 The NRA National Firearms Museum is home to a Kimber Classic Royal 1911 that was found in the basement rubble of the World Trade Center after the 9/11 attack. Amazingly, when the gun was found it was still in working order.

In the basement of Six World Trade Center was a U.S. Customs vault that held firearms and other items to be processed for export and import into the United States. At the time of the attack, the Kimber was in the vault waiting to be processed and sent to Italy, and it wasn’t until months after the attack that the gun, along with 99 additional firearms, was discovered.

After an inspection, the Kimber was sent to Italy as originally planned, and it remained in Europe for more than a decade. However, when an Italian man discovered the Kimber’s history, he contacted the NRA National Firearm Museum and offered to put it on display. The museum gladly accepted and the gun was sent back to the U.S., where it remains alongside a Smith & Wesson carried by Walter Weaver, a NYPD officer who died on 9/11.