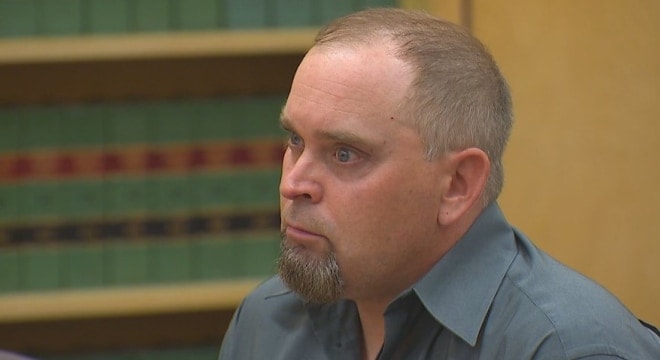 Tobin Panton was sentenced to 8.5 years in prison for manslaughter in the first degree after he fatally shot a sleeping neighbor while firing at a fleeing car thief. (Photo: Komo News)

A man who fired his Glock at a car thief leaving his driveway with his vehicle is headed to prison for the death of a neighbor struck by one of his bullets.

Tobin Panton, 40, of Bonney Lake in the Tacoma area, was sentenced last week in Pierce County Superior Court on one count of manslaughter in the first degree for the death of 61-year-old Linda Green.

“Instead of calling 911 he took matters into his own hands,” said Deputy Prosecuting Attorney Erika Nohavec. “He didn’t think of any of his neighbors and Linda Green lost her life that day.”

The incident, which occurred last November, happened just after Tobin was getting out of the shower and saw his Jeep leaving his driveway. Retrieving his .40-caliber Glock, Tobin fired at the departing vehicle from his porch until he ran out of ammunition. Pierce County deputies were called a brief time later to a home two blocks away from the man’s residence, where Green was found shot in the head in her sleep.

Panton’s Jeep was later found abandoned a mile away from the scene, and the thief has not been found.

Initially entering a plea of not guilty, Panton pleaded guilty in July.

As reported by Q13 Fox, Panton, who until the incident had no criminal record, was remorseful before the court this week.

“I’m very, very sorry,” said Panton. “I cannot say that enough. I didn’t want to hurt anybody; I was trying to stop a kid from being a punk.”

Prosecutor Mark Lindquist pointed out that Washington law doesn’t allow the use of deadly force to protect property.

“He did intend to pull the trigger,” said Judge Timothy Ashcraft. “When you do that, you have to accept the consequences as to where that bullet ends up.”