7-Eleven altercation ends in suspect’s death, 2 others behind bars 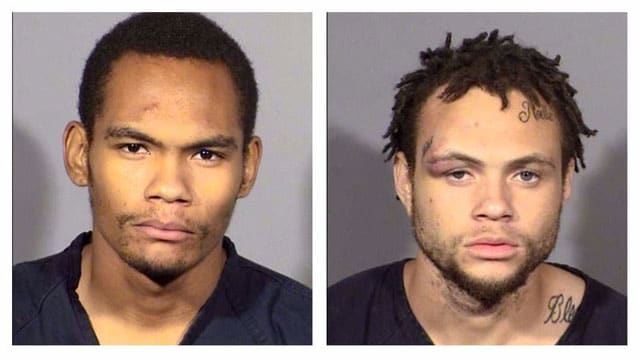 An altercation at a 7-Eleven in Las Vegas Sunday night resulted in gunfire, a dead suspect, and two more suspects in jail.

Brothers Eric Ball, 18, and Richard Ball, 20, were arrested on charges of attempted robbery with a deadly weapon, conspiracy to commit robbery and burglary.

According to reports from local media, the incident started around 11 p.m. after a clerk confronted David Barron about spitting on the sidewalk outside of the business. Barron became defensive, and an argument ensued.

Meanwhile, the Ball brothers were inside of the store and also confronted by the store owner. It’s unclear what spawned the dispute between the owner and the brothers, but all five eventually ended up in a melee.

The trio eventually left the store, but returned about 45 minutes later armed with knives and brass knuckles. The trio talked about getting their items, although the clerk said they had nothing at the store that belonged to them. At this time, they also confronted the same clerk about the earlier altercation.

At that point, the owner grabbed the phone to call the police, but the Ball brothers hopped over the counter and hit the clerk, while Barron went after the owner.

As the fights continued, the clerk pulled out a handgun and fired a warning shot into the air, but Barron, who was armed with a knife, continued to struggle with the owner. The clerk, fearing for his own safety as well as that of the owner, then shot Barron multiple times in the chest. Barron fell to the ground just outside of the front door.

Reports indicate the Ball brothers were still fighting with the clerk and the owner when police arrived a short time later, and the brothers were promptly arrested.

Barron was rushed to a hospital, but died from his injuries.

Metropolitan Police Department homicide Lt. Dan McGrath said in a press conference that two knives were recovered at the scene.

McGrath also said the clerk who shot Barron has cooperated with the investigation, and no charges have been filed against him at this time, although it does not appear that he has a valid license to carry a concealed weapon. Nonetheless, McGrath said it’s common for convenience store clerks in the area to carry firearms.

“This is a challenging area. It has been for my 25 years here,” McGrath said. “I wouldn’t say it’s ‘high crime,’ but criminal activity has been known to be around here.”