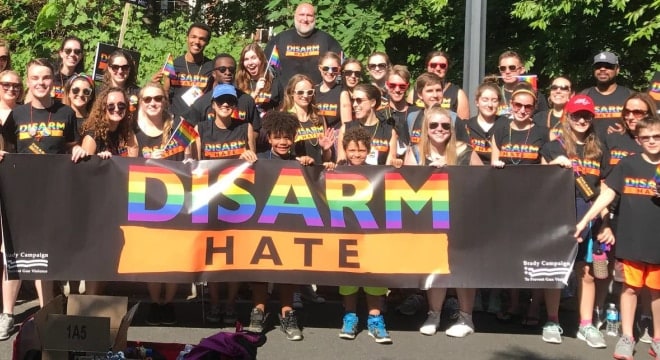 The proposal, designed to disarm those who may have violent tendencies exhibited by minor civil rights-related crimes, is backed by national gun control groups. (Photo: The Brady Campaign)

Lawmakers this week unanimously approved a bill to strip gun rights from those convicted of misdemeanor hate crimes.

The measure, AB 785, passed the California Legislature without a single “no” vote and is backed by Assemblyman Reggie Jones-Sawyer, D-Los Angeles, who argues the proposal heading to Gov. Brown’s desk is timely considering recent events.

“There are too many examples in our country’s recent history, which show what a firearm can do in the hands of people who practice hate,” said Jones-Sawyer in a statement. “The recent incident in Charlottesville, where heavily armed Neo-Nazis, Klansmen and white supremacists, spewing hatred and inciting violence under the guise of protecting free speech and the right to bear arms, is not what the founding fathers of this great nation were protecting when they drafted our constitution.”

His bill, the Disarm Hate Act, adds to the state’s already existing list of misdemeanor crimes that result in an automatic 10-year prohibition on possessing a firearm. The additions would include those who are convicted of misdemeanor interference with another person’s civil rights or damage of property because of their perceived race, religion, national origin, disability, gender, or sexual orientation. Violations would be a felony and result in a lifetime gun ban.

On the national stage, Democrats introduced a federal version of the Disarm Hate Act in Congress earlier this year.

The measure has the backing of several gun control organizations, including the Brady Campaign, the Violence Prevention Coalition, the Coalition Against Gun Violence, and Americans for Responsible Solutions.

“The reality of hate-fueled crime is why it’s so important for elected leaders to do everything in their power to keep guns out of the hands of individuals who wish to terrorize and divide our communities,” said Peter Ambler, executive director of Americans for Responsible Solutions. “Governor Brown should sign this bipartisan bill into law and add California’s name to the growing list of states across the country that have taken responsible steps that make it harder for hate crime offenders to access guns.”

Brown, a Democrat, has not signaled whether he will sign or veto the measure. In the past, he vetoed expansions to the 10-year ban in 2016 and 2013, arguing the proposals found a novel way to make a new crime, which he said is the last thing the state needs due to prison overcrowding.