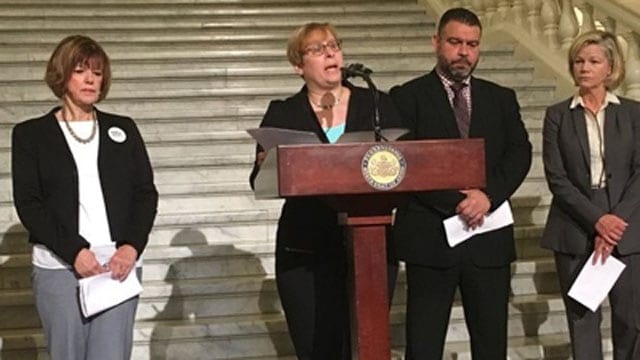 CeaseFirePA Executive Director Shira Goodman spoke against Senate Bill 383 at a news conference Tuesday. Among those who joined her there are (from left) Debra Marteslo of Moms Demand Action for Guns Sense in America, state Education Secretary Pedro Rivera, and Gretchen Santamour, board chairwoman of the Education Law Center. (Photo: Jan Murphy/PennLive)

A state-based gun control group launched a video campaign this week against a proposal to arm Pennsylvania’s teachers pending in the Legislature.

CeaseFirePA Executive Director Shira Goodman said although no votes on Senate Bill 383 have been scheduled in the House, she hopes the videos will make lawmakers think before voting on a measure “the public is aware of and not happy about.”

“There are thousands of armed teachers and administrators in schools across the country and there has never been an incident where they have shot the wrong person, had their weapons taken by a student, or used a weapon inappropriately,” he said.

The Senate passed the measure 28-22 in June, despite resistance from some pro-gun groups concerned about privacy protections within the legislation. But, Joe Pittman, White’s chief of staff, told Guns.com in June the bill isn’t its final form, yet.

“It’s an ongoing process,” he said. “Even though it’s a may-issue, it wouldn’t allow school districts to ban weapons outright. It just gives them a framework for drafting a policy to allow employees to carry.”

Goodman’s allies, however, come in the form of legislative Democrats and the state’s Education Secretary Pedro Rivera, who all say any bill allowing teachers to carry comes at a detriment to students.

“We know that students cannot perform their best if they’re not healthy, if they’re not engaged, and if they’re worried or stressed,” Rivera said during a rally Tuesday at the state capitol. “It is important for educators to use all the tools at their disposal to create secure learning environments in which students can thrive.”

CeaseFirePA launched three separate videos on its YouTube channel playing out scenarios —  involving guns in schools — that it says could quickly turn dangerous. The videos can be viewed here, here and here.

“We do not want to bring these risks in our school. They are unacceptable,” Deb Marteslo, Pennsylvania chapter lead of Mom’s Demand Action, told PennLive Tuesday. “It is just not sound policy to put anyone other than trained professional law enforcement in our schools. And while I respect those who are willing to volunteer to carry a gun in school, our children deserve more than amateur even a talented amateur to keep them safe.”

Gov. Tom Wolf said he will veto the legislation should it get to his desk.