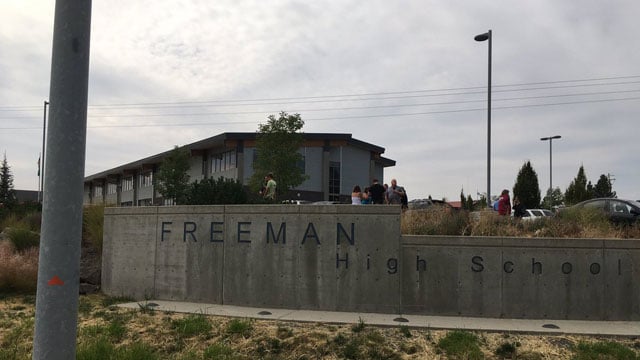 The school shooting rocked the tight-knit community of only a few hundred residents. (Photo: Richmond Times-Dispatch)

A Washington high school student is in police custody after he opened fire in the hallway of his school Wednesday morning, killing one student and seriously injuring three more.

Authorities have not released the identities of either the suspect or the victims and said that information would be released when and if appropriate.

According to a press release from the Spokane County Sheriff’s Office, the shooting occurred around 10 a.m. at Freeman High School in Rockford, about 20 miles south of Spokane. Initial reports indicate the deceased victim approached the suspect and attempted to talk him out of pulling the trigger before he was shot in the head. The suspect continued to fire down the hallway of the school, striking three more students, but at that point, the suspect’s gun jammed.

“This would have been a lot worse if it didn’t,” Spokane County Sheriff Ozzie Knezovich said of the jammed gun, also noting that the suspect was armed with multiple firearms, which he apparently carried to the school in a duffel bag.

“That student came to school armed,” Knezovich said. “He entered the school. He proceeded to take his weapons out. At that point he attempted to fire one weapon, it jammed. He went to his next weapon.”

As the gun jammed, a school custodian approached the student and ordered him to surrender. Soon thereafter, a school resource officer, who had been at the nearby middle school dealing with an unrelated incident, showed up and placed the suspect in custody.

“This is another example of somebody that had a lot of courage, stepped up and stopped this before it got worse,” Knezovich said.

One victim was pronounced dead at the scene, while the remaining three victims were rushed to a local hospital. Although they suffered serious injuries, all three are expected to survive.

Without going into detail, Knezovich said it appeared the shooting was the result of some type of bullying situation.

“These are senseless and tragic events that really don’t need to happen and I don’t understand them,” Knezovich said. “I don’t think anybody can make any sense out of this but we need to figure out what’s gone wrong with our society that our children decide that they need to take weapons to deal with the issues that they’re facing.”

The sheriff’s office said their hearts are with the community during this tragedy and thanked them for their kind words, patience, and understanding throughout the horrific incident.