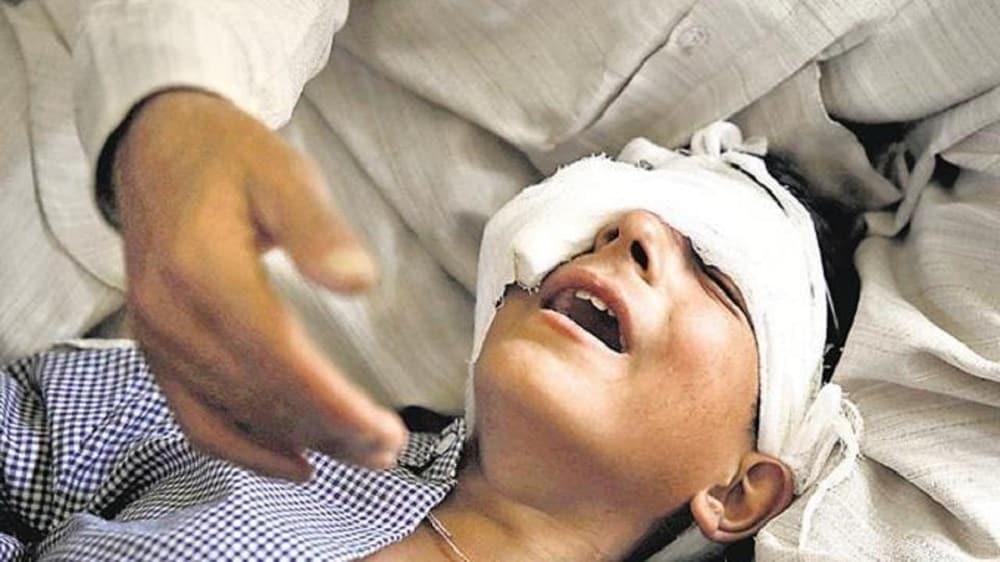 A father holds his son, said to have been injured by security forces with pellet-firing shotguns in Srinagar, Kashmir, on Aug. 18, 2016. (Photo: Reuters)

Human rights group Amnesty International has asked India to ban the use of pellet-firing shotguns by security forces in the conflict-ridden areas of Jammu and Kashmir in the northernmost region of the country.

The group’s India chapter released a report on Wednesday, entitled Losing Sight in Kashmir, that documents the cases of 88 people whose eyesight has been damaged, some permanently, by security forces using pellet-firing shotguns as crowd control devices between 2014 and 2017.

The report says security forces in Jammu and Kasmir have been using pump-action shotguns to fire metal pellets since at least 2010.

“These inherently inaccurate shotguns fire hundreds of metal pellets which spread over a wide area,” the report says. “Their use has blinded hundreds and killed at least 14 people since July 2016.”

During the 2016 period of unrest in Kashmir, which flared up after the death of Hizbul Mujahiddin militant, Burhan Wani, security forces widely used the pellet guns, killing several people and blinding thousands, the Hindustan Times reported. Kashmir hospital data show over 6,000 people suffered pellet gun injuries during that time, with over 1,100 documented eye injuries.

“In his Independence Day speech, Prime Minister Narendra Modi said that change in Kashmir will not come from guns or abuses — na goli, na gali. If the government truly means this, they must end the use of pellet-firing shotguns, which have caused immense suffering in Kashmir,” Aakar Patel, executive director of Amnesty International India, said in a statement.

“Authorities claim the pellet shotgun is not lethal, but the injuries and deaths caused by this cruel weapon bear testimony to how dangerous, inaccurate and indiscriminate it is,” Patel continued. “There is no proper way to use pellet-firing shotguns. It is irresponsible of authorities to continue the use of these shotguns despite being aware of the damage they do.”

The report also announced the launching of a campaign urging authorities to end the use of pellet guns, provide reparations to those injured and to the families of those killed, open investigations into all incidents of injury or death, and provide crowd control training for security forces.

“Authorities have a duty to maintain public order, but using pellet shotguns is not the solution,” said Patel. “Security forces must address stone-throwing or other violence by protesters by means that allow for better targeting or more control over the harm caused.”