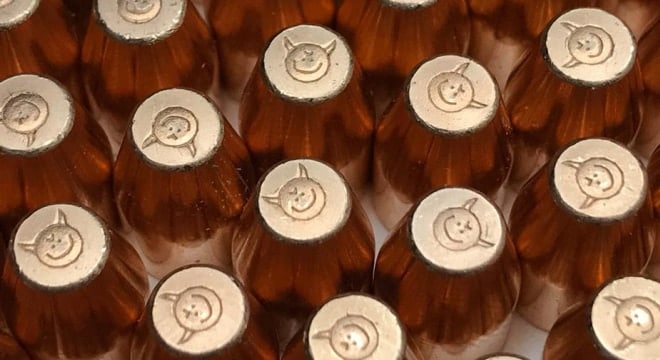 What the Hoon? (Photo: RMR)

If you are a fan of 124-grain FMJ flat nose 9mm loads or know who Owen Zastava Pitt is, a limited run of novelty Monster Hunter International-themed bullets may be for you.

Produced by Rocky Mountain Reloading at their Idaho facility, the Match Winner-series bullets went up for sale this month with the classic MHI logo stamped on their face.

For those not in the know, about a decade ago Larry Correia began his Monster Hunter International series followed by his Monster Hunter Memoirs spin-offs, a series of urban fantasy books that feature lots of very on-point firearms lore sandwiched around, well, killing monsters for cash.

“These are just bullets for handloading,” notes RMR on the Monster Hunter Nation website. “This is not loaded ammunition. Also, be aware that this design is on the front of a 9mm bullet. It is VERY small and serves no purpose other than being really cool. Please do not expect anything magical or supernatural from them. They are just bullets with an awesome stamped logo.”

Correia is dedicating his share of the profits from the bullets to the Houston Food Bank, and some 60,000 bullets were sold last week alone.