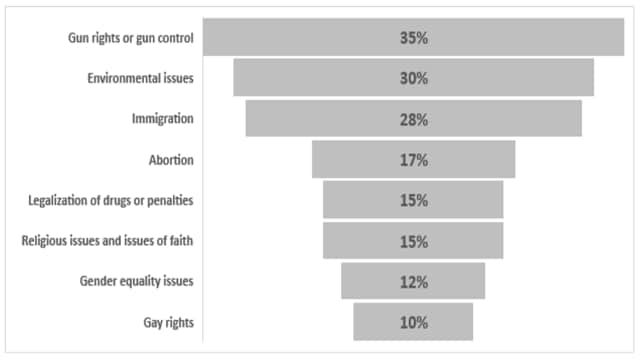 Answers to the question “Of these issues, which one or two, if any, are important enough to you to have an impact on how you vote in an election?” from a Wall Street Journal/NBC News survey published last week. (Photo: NSSF)

Federal gun policy inspires votes more than other hot button issues — including the environment, abortion and immigration, according to a survey published last week.

More than a third of respondents to the Wall Street Journal/NBC News poll released Sept. 6 said “gun rights or gun control” most influence their decision to vote on election day.

The survey questioned 1,200 Americans about their feelings toward President Donald Trump, the country’s heated political divide and its prosperity for future generations, among other political issues. A few questions regarding attitudes toward gun policy were scattered throughout the 21-page survey, including whether respondents feared the government would go too far in restricting access to firearms — or not far enough. The results showed an even 42-42 split between those who worried “quite a bit or a great deal” about attempts to place limits on gun ownership versus those who weren’t concerned at all.

Some 18 percent of respondents identified as a member of the National Rifle Association and 48 percent said they owned guns — the highest rate recorded since WSJ/NBC first asked the question in 1999.

“There is an understandable reluctance to report firearm ownership on public opinion surveys,” he said. “While the 48 percent figure reported in this poll is likely lower than reality, it is worth noting the upward trend in households with firearms … Americans care about their gun rights and are increasingly exercising those rights. With a majority of Americans concerned that the government will impose new gun control measures, elected officials can’t afford to ignore the results of this survey.”